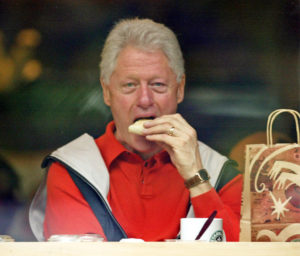 President Bill Clinton’s advisers carefully considered how to explain the president’s military action against Iraq in 1998 as the House was debating his impeachment, according to records from the Clinton White House that were released Friday. The documents also touch upon Osama bin Laden, consideration of military action in Haiti in 1994 and preparationsfor Supreme Court nomination hearings.

The National Archives released about 1,000 pages of previously restricted documents from Clinton’s two terms, part of about 20,000 pages of Clinton records that have been disseminated since February. The papers, which are stored at the Clinton Presidential Library in Little Rock, Arkansas, have received interest as former first lady Hillary Rodham Clinton considers another presidential bid.

A look at the documents:

The White House mulled how to explain Clinton’s decision to launch a military strike against Iraq the day before the House was to debate bringing impeachment charges against the president in the Monica Lewinsky scandal.

The notes of national security aide Tony Blinken include a draft of Clinton’s address announcing the air strikes in December 1998 as a response to Saddam Hussein’s refusal to allow United Nations inspectors to look for weapons of mass destruction in Iraq.

The draft indicates White House counsel Charles Ruff, who was defending Clinton against impeachment, cleared a version that would say, “All of us would have preferred that the need for this action had not arisen on this day — on the eve of the impeachment debate in the House of Representatives.”

Instead, Clinton’s address ended up sticking close to what the draft refers to as White House chief of staff John Podesta’s version. The president said, “Saddam Hussein and the other enemies of peace may have thought that the serious debate currently before the House of Representatives would distract Americans, or weaken our resolve to face him down.”

One tweak: In Podesta’s version, the impeachment debate was termed “grave” instead of “serious.”

House Republicans suggested it was Clinton who was trying to distract Americans with the timing of the attack. The Republican-led House voted to impeach on the last of the four days of air strikes; the Democratic-controlled Senate later acquitted Clinton.

In one file referencing bin Laden, Clinton urgently asked his top national security aide whether the CIA overstated the involvement of the terrorist leader in the August 1998 bombings of U.S. embassies in Kenya and Tanzania. In his April 1999 scrawled note, Clinton referred to a New York Times story from that month that suggested U.S. intelligence officials had gathered no firsthand evidence of bin Laden’s involvement.

“If this article is right, the CIA sure overstated its case to me — what are the facts?” Clinton asked national security adviser Samuel “Sandy” Berger. Clinton’s note prompted a flurry of replies from Berger, counterterrorism coordinator Richard Clarke and aide Daniel Benjamin, but those responses were withheld, apparently for national security concerns.

Government prosecutors later indicted bin Laden among a group of al-Qaida leaders and operatives for their involvement in the simultaneous bombings, which killed 213 people in Nairobi and 85 in Dar es Salaam. Six terror associates were convicted and are serving life terms in U.S. prisons.

Bin Laden, the mastermind of the Sept. 11 attacks, was still under indictment when he was killed by U.S. forces in Pakistan in May 2011.

In 1994, Clinton’s team weighed taking action in Haiti to restore democracy and to remove military leaders who staged a coup. Congress opposed any intervention and Clinton’s aides debated how to act without lawmakers.

“The operation is likely to involve low intensity and short conflict. Given the consent of President (Jean-Bertrand) Artistide and the limited capability of the Armed Forces of Haiti, such action does not intrude upon the power of Congress to declare war,” national security aide Tony Lake wrote to White House counsel Lloyd Cutler.

In another memo, Lake, Cutler and Pat Griffin urged Clinton to take action without congressional approval. They said that simply informing Congress immediately before military strikes was sufficient.

Clinton deployed armed forces in September 1994. As some U.S. military members were in the air en route to the island, Haitian military leaders agreed to step down and they left the country in October. Aristide resumed power.

The files show the behind-the-scenes planning that took place to win Senate confirmation of Ginsburg and Breyer’s Supreme Court nomination. After Justice Byron White announced his retirement in 1993, Clinton’s team noted that “Senate leaders, particularly Chairman (Joe) Biden, have previously made strong statements about their desire to be consulted on Supreme Court nominations.”

Ginsburg’s papers include a list of recommended witnesses — sent by her husband, Washington attorney Martin Ginsburg — along with talking points for an unnamed adviser playing Sen. William Cohen, a Maine Republican, in preparation sessions.

Before the hearings, White House aide Ron Klain wrote that Ginsburg’s preparation showed she viewed the White House as “having a stake in presenting her as a moderate and in getting along well with the Senate; she sees her interests as ‘being herself,’ preserving her ‘dignity,’ and promoting her ‘independence.'”

When Clinton nominated Breyer in 1994, White House aide David Dreyer suggested the confirmation process could be used “as a vehicle to put the President and his staff in the best possible light.” Dreyer also recommended “shutting down critics” such as Sen. Howard Metzenbaum, an Ohio Democrat. Both Ginsburg and Breyer were confirmed with broad support.

Clinton nominated Sotomayor, then a federal district court judge in New York, to the appellate bench in 1997.

In one letter, Sotomayor thanks White House associate counsel Peter Erichsen for their spring 1996 meeting, writing, “It may appear strange that a meeting of our type could be described as enjoyable, but I do describe it as such.”

Sotomayor was recommended by a group of White House aides in a March 1997 memo, describing her as “well known and well respected not only for her compelling life story but also for her legal acumen and work ethic.” She was eventually confirmed in 1998 and joined the Supreme Court in 2009.

A June 1996 memo from top aides to Clinton and Gore detailed White House efforts to oversee security in Atlanta for the Summer Olympics Games — as well as to lay plans for Clinton administration efforts to tap into the heavily televised events’ successes.

Saying the federal government had a “considerable” stake in the events, the aides wrote that the Olympics “will be a daily focus at the White House.” In a nod to the growing importance of instant media and communication responses, the aides devised daily meetings of communications aides to respond to good-news developments. “The key is to be able to be spontaneous in celebrating successes at the gates by planning for such ‘spontaneity,'” wrote White House chief of staff Mack McLarty and Gore aide Ron Klain.

The 1996 games proved to be a mixed success. A record 197 nations participated, but there were complaints about crowding and commercialism. A bomb set off in Atlanta’s Centennial Olympic Park caused two deaths and 111 injuries. Eric Rudolph, an anti-abortion activist, pleaded guilty in 2005 to the bombing and is serving a life prison term.

In July 2000, White House deputy chief of staff Steven Ricchetti — now Vice President Joe Biden’s chief of staff — wrote to colleagues that they would have to take vacation or unpaid leave if they wanted to attend that year’s Democratic convention. Added White House counsel Beth Nolan: “With few exceptions, you must attend the convention on your own time.”

Senior White House staff members were stern in warning aides that they should not use their official positions to help Gore’s campaign. Specifically, no staffers could make fundraising calls or have political events at the White house.

“The simplest rule to follow is the commonsense practice that anything obviously political that involves the use of resources should be done by the campaign, even if doing it here can be legally justified,” senior White House lawyers wrote to colleagues.