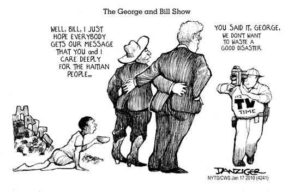 Project Expected to Create Hundreds of Jobs and Bring Many Long-term Economic Benefits to Haiti.Sun Herald:

WASHINGTON — The Clinton Bush Haiti Fund announced today that it would invest $2 million to complete construction on a major hotel project in Haiti that was abruptly halted following the devastating 2010 earthquake.

The 130-room Oasis Hotel was fully funded and construction was well underway prior to the quake. While the building itself remains structurally sound, work on the project ceased when several of the original Haitian shareholders perished while others suffered severe financial losses, making them unable to meet their investment commitments to the project.

“The Oasis Hotel symbolizes Haiti ‘building back better,’ and sends a message to the world that Haiti is open for business,” Clinton Bush Haiti Fund’s Vice President of Programs and Investments, Paul Altidor said. “For Haiti’s recovery to be sustainable, it must attract investors, businesses and donors all of whom will need a business-class, seismically-safe hotel.” In addition to sleeping rooms, Oasis will have significant meeting space and other business amenities.

Fewer than 100 hotel rooms survived the quake in Port-au-Prince, and today Haiti has a critical shortage of hotel space that meets even the most basic standards for business travelers. Jerry Tardieu, Chief Executive Officer of SCIOP S.A., the Haitian corporation that developed and promoted Oasis, highlighted that the project’s environmental and safety standards will serve as a model for future such developments in Haiti.

In mid-2010, the International Finance Corporation (IFC), the private sector arm of the World Bank Group, provided $7.5 million in financing to restart construction of the hotel, which has a total cost of $29 million, but more funding was needed. The Clinton Bush Haiti Fund’s $2 million equity investment catalyzed new funding sources for the project, encouraging large investments from other groups that closed the funding gap. Investors included members of the US Haitian diaspora.

Oasis is creating employment for close to 400 workers in the construction phase, and will create 200 permanent jobs, 75% of them for women. The hotel will source nearly all of its goods and services from local vendors, providing added economic benefits to the community. Additionally, there will be 12 retail spaces, some of which will sell locally manufactured goods, Haitian paintings, and artisan crafts. Based on its experience and local market statistics, the IFC estimates that each job in a hotel project of this nature in Haiti, generates three indirect jobs in the community.

In addition to its equity investment, the Clinton Bush Haiti Fund will make a $100,000 grant to create a training facility for the hospitality industry that will be available to all Haitians looking for employment in this sector. Both the Oasis Hotel and the affiliated training facility will be managed by Occidental Hotels and Resorts (OHR), a Spanish global hospitality chain.

The Clinton Bush Haiti Fund is a 501(c)(3) nonprofit organization founded after Haiti’s January 12, 2010 earthquake, when President Barack Obama asked former Presidents Bill Clinton and George W. Bush to lead a major fundraising effort to assist the Haitian people to “build back better.” The Clinton Bush Haiti Fund initially responded to the catastrophe with millions in humanitarian relief. By the time the Fund began independent operations in May 2010, it transitioned to primarily serving its longer-term mission of sustainable reconstruction efforts designed to promote job growth and economic opportunity, and enabling Haiti to chart its own successful future. To learn more visit www.ClintonBushHaitiFund.org.