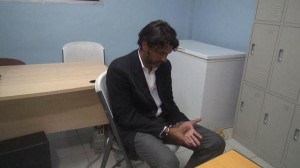 Oct 23, 2012
Clifford Brandt, son of the wealthy Fritz Brandt and a member of one of Haiti’s richest families, in handcuffs, accused of participating in a large kidnapping ring in Haiti.

According to Haiti news reports, Clifford Brandt reportedly admitted his involvement in several kidnappings including the October 16, 2012 kidnapping of the Moscoso children – Coralie and Nicolas Moscoso.

Clifford Brandt is the managing director of Mazda dealership in Delmas Haiti.

“His activity, says Secretary of Public Security, Reginald Delva, “was to come to Haiti from his home in Miami, collect the ransom monies from his kidnapping enterprise in Haiti “–

In a broadcast Haiti interview, Haiti State Secretary of Public Security, Reginald Delva interviewed by Gary Pierre Paul for Scoop FM maintains that documents show Clifford Brandt demanded U.S. $2.5 million for the release of the two Moscoso children. This is an on-going investigation. Reports indicate a list of folks Clifford Brandt’s kidnapping ring had pinpointed to kidnap for the Christmas season.

Sources confirm that this well-connected mafia ring has been in operation for some time wreaking havoc in Haiti.

Many Haiti observers question whether the weak Haiti justice system will be bought out by the Brandt family, as its one of the most prominent families in Haiti where justice is oftentimes for sale. The Brandts’ friends include some of Haiti’s most powerful neocolonial corporate enemies whose many transnational businesses they give a Haiti subcontractor face to and mostly export all accumulated capital out, impoverishing Haiti, paying no taxes or tariffs.

39 thoughts on “Clifford Brandt in handcuffs ! What a disgrace for the Brandt Family ! (Haiti News Report)”