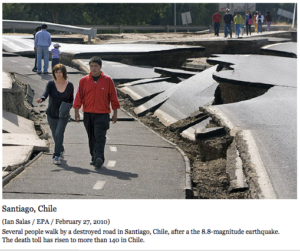 In the end, though, the damage is not likely to be as heavy as in Haiti because of the depth of the quake, the population density and the amount of preparation.

Reporting from Mexico City – The magnitude 8.8 earthquake that jolted Chile early Saturday packed roughly 500 times the wallop of the seismic disaster that struck Haiti last month. But the damage and deaths in Chile, still being tallied, will probably be much less devastating.

Chile is relatively well prepared for earthquakes. An area of intense seismic activity, the mountainous South American country has experienced numerous deadly jolts, including a 9.5 quake in 1960, the biggest ever recorded. Children grow up doing earthquake drills in school. Laws require construction that can withstand temblors, and an immediate-response network of rescuers and emergency personnel was able to quickly spring into action.

Haiti had not had a major quake since the 19th century. Most of its housing and other buildings consisted of cinder block and un-reinforced concrete. It was that type of construction that proved a death trap when the magnitude 7.0 earthquake hit Jan. 12, killing more than 215,000 people and leaving a million homeless.

Haiti is the poorest country in the hemisphere, Chile one of the wealthiest. Devastation was so complete in the Haitian capital, the country’s main population cluster and nerve center, that the government virtually disappeared.

In Chile, President Michelle Bachelet, her capital battered but still standing, was visible in the first hours after the quake, clearly in charge, speaking to the public and overseeing rescue efforts.

“In this kind of disaster we are all involved,” she said in one of many live television broadcasts as she calmly but forcefully ticked off the steps being taken to count the dead, treat the injured and inspect the damage.

Mark Benthien of the USC Earthquake Center said an 8.8 quake causes 512 “times the shaking” that a 7.0 does. It produces a larger rupture surface, meaning a broader area is shaken. The duration of the movement is also longer.

Unlike the Haiti disaster, Saturday’s quake had an added potential for calamity when it unleashed tsunamis that are hit parts of the planet thousands of miles away.