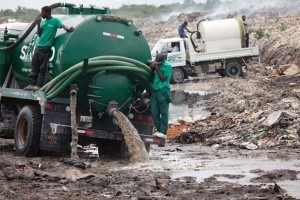 scienceblogs.com-Deborah Sontag’s New York Times piece “Haiti’s Cholera Outraced the Experts and Tainted the UN” is a reminder that while public attention to the earthquake-ravaged country has waned, cholera still presents a major threat to the country’s people. It’s also just a sad story about how one apparently small malfunction can have disastrous consequences for an entire nation.

The UN’s independent experts concluded that the strain of cholera now afflicting Haitians had come from South Asia, and originated in the tributary behind a base used by Nepalese UN peacekeeiping troops, most likely from a faulty sanitation system. News organizations had observed overflowing sanitation systems by the base shortly after the cholera outbreak began, but as Sontag describes it, the UN’s slow response to public suspicions did little to temper Haitians’ distrust.

In a Reuters opinion piece, Felix Salmon criticizes Sontag for putting too much emphasis on “playing the blame game.” It’s important to remember, though, that public opinion toward the UN — and to international assistance efforts as a whole — will be an important factor in the success of cholera efforts. Trust is particularly important in vaccination efforts, as this segment from Sontag’s piece demonstrates:

Late last fall, the new government of President Michel Martelly had authorized a vaccination campaign. It was to start small, immunizing 50,000 residents of a Port-au-Prince slum and 50,000 rural residents in the St. Marc area.The organizers, wishing they could have begun a year earlier and more broadly, were nonetheless relieved to have secured the new administration’s cooperation; it helped that Shanchol, the cheaper vaccine at $1.85 a dose, had been approved.

The organizers — Partners in Health and the Haitian group Gheskio — were also pleased to be starting well before the rains; the vaccine, considered nearly 70 percent effective, is administered in two doses two weeks apart and takes another week to take effect.

In February, Djencia Augustin, 25, a petite, vivacious law student, was racing from mud hut to mud hut in the rice fields of Bocozel to register residents. She wore a T-shirt with a wordy slogan — “We are fighting cholera with Shanchol vaccine without forgetting the other principals of hygiene” — and, in the shade of breadfruit trees, gathered barefoot villagers in threadbare clothing around her as she recorded their information on a computer tablet.

“Some people think cholera is not in our country anymore,” Ms. Augustin told them. “That’s not true. Cholera will come to visit when the rains arrive, so you need to be prepared.”

Bocozel seemed eager. Chavan Dorcelus, 58, said: “It’s a real bonus for us. Plus it’s free, and it can’t hurt.”

Told that pregnant women were ineligible, Fada Joseph, 24, patted her belly. “That’s not really fair. I’m very scared of cholera,” she said. “And if I got an abortion, would that help?”

But in mid-March, radio reports characterized the project as an experiment on Haitian guinea pigs. With $370,000 of vaccine sitting in coolers, a government bioethics committee took up the issue. The campaign appeared in peril. Dr. Farmer said last Thursday, however, that the Haitian health minister had just promised him that she would resolve the issue in the coming week.

The relationship between donors and local residents is also important when it comes to getting improved water and sanitation established nationwide, which is the long-term solution to cholera and other water-related diseases in Haiti. (Sontag reports one estimate of the price tag for this: $800 million to $1.1 billion.) As development specialists have been learning, good communication and local involvement in planning are essential to water and sanitation projects — otherwise, it’s all too easy to end up with a string of broken water pumps, or concrete latrines being used as storage sheds. While “blame games” alone won’t lead to a solution, it’s important to acknowledge the source and extent of the Haitians’ mistrust toward the UN, and figure out how to address it so that efforts to stamp out cholera can succeed.