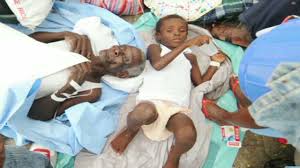 The cholera epidemic that has claimed so many lives in Haiti remains a public health crisis, and it demands action  ̶  from all of us. Action is exactly what 19 Members of Congress are reasonably asking of the United Nations, and it is what UN Secretary-General Ban Ki-moon is working to deliver.

In a letter spearheaded by Rep. Maxine Waters (D-Calif.) earlier this summer, these Members urged a “nationwide response to the epidemic.” On Friday Ban responded, outlining major steps that have already helped to decrease the rate of new infection by 90 percent since the outbreak began, and further steps that stand to build on this progress.

The production of over 200,000 vaccines through UNICEF;

Collaboration with the Haitian government on an upcoming vaccination campaign;

Over 9 million critical items, such as water purification tablets, soap and medical equipment supplied to the Haitian Ministry of Health;

Improved water supply in some of the most vulnerable areas;

Collaboration with the Haitian government to develop a water quality monitoring system for all 140 communes;

Community-based hygiene campaigns through the training of over 1,400 trainers and 5,200 community workers who have reached over 700,000 families; and

Logistical support for the movement of personnel and supplies, like the 400 metric tons of health, water and sanitation materials to areas facing outbreaks.

Still, as the Secretary-General fully acknowledges in his letter, “further progress must be made.” To that end, in May, the UN pledged $29 million in new funds, bringing the current total pledge in support of the Hispaniola Initiative to $207.4 million.

While Members express concern that the UN has thus far committed only $23.5 million for this initiative, it is not for lack of will. The Secretary-General is diligently seeking funds from donors, including UN member states and philanthropies.

Yet it bears noting that this is one action that is not in the UN’s hands alone. The UN has no independent source of funding, and no reserve funds set aside for just such an emergency. All of its funds collected from member states are put to hard work for specific use addressing global need, be it in targeted missions that protect democracy, curb nuclear threats, or reduce the threat of global pandemics, to name a few.

The millions already pledged to Haiti are an earnest goal, yet they can only be raised from willing donors ­– like the United States. Further complicating matters, as the Secretary-General notes, “the austere fiscal environment” affecting UN member states could significantly affect new financial commitments.  Thus, it will take concerted action by the entire international community to fully fund the Hispaniola Initiative.

There has been important public discussion about how the cholera crisis could be better addressed, but the UN is and will remain resolutely focused on achieving the goal of “better standards of life in larger freedom,”  as laid out in its Charter. The UN’s action clearly demonstrates that it stands by this commitment, and that it will continue its support in Haiti just as it assists countries the world over. Nevertheless, this assistance from the UN needs to be coupled with support from the public health community, Congress, and fellow member states to reach the end goal of a better future for all Haitians.

Peter Yeo is executive director of the Better World Campaign.

I can remember when cholera hit Haiti and the denials started immediately, even though the cause was an obvious one. El Jazeera photographed a UN truck dumping poo from the Nepalese detachment into the Artibonite River system

A couple of days later Haiti had cholera.

There is a crude saying… “Shit happens…”  and in this case it really did!!  Unfortunately, the UN started an immediate Cover Your Ass stance and still refuses to completely and totally accept responsibility for what is a simple truth.

They avoid liability or responsibility. Their only action has been a promise to press nations for support in an effort to eradicate, or at least slow the disease.

Tens of thousands will eventually lose their fight against this terrible disease as Ban ki Moon finally dies a comfortable death in old age.