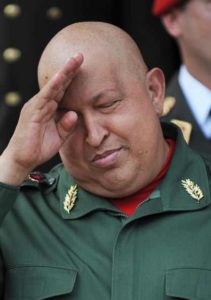 Venezuela’s President Hugo Chavez, who has yet to confirm his attendance at the Summit of the Americas this coming weekend, faces a slippage of regional influence as he undergoes radiation therapy for cancer.

A recurrence of cancer first detected in 2011 has kept Chavez in Havana for days at a time for the radiation treatment, with brief weekend trips home between rounds.

He was to complete his third round on Wednesday, and so far has not said whether he would attend the two-day summit of regional leaders in Cartagena, Colombia, which begins Saturday.

“The information we have is that he will attend, although he likely will not spend the night in Cartagena,” said Colombian Foreign Minister Maria Angela Holguin, whose government is hosting the gathering of heads of state and government.

“It would be a pleasure for us to have him for the night, but certainly it is complicated with the treatment he is undergoing. We think he will attend, unless there is an additional health issue,” she said in Bogota.

A center of attention at past regional summits due to his flamboyance and sometimes crude rhetoric, Chavez, in power since 1999, has led a group of leftist governments that he organized as a counterweight to the United States.

Backed by one of the world’s largest oil reserves, the 57-year-old Chavez has created the Bolivarian Alternative for the People of Our Americas, or ALBA by its Spanish acronym, and Petrocaribe, a group of countries that receives subsidized Venezuelan oil.

But the Sixth Summit of the Americas this year coincides with deepening uncertainty about Chavez’s health and the stagnation of his once powerful regional influence.

“The internal economic difficulties and the loss of support for the Bolivarian project even in Venezuela, while still important, impedes Chavez’s external projection,” said Giorgio Romano of the Federal University of ABC in Brazil.

Although polls show him in the lead in Venezuela’s October 7 presidential election, Chavez confronts public fatigue with his “socialist revolution” and an unstable economy with the highest inflation in the region.

The opposition, united behind a single presidential candidate, state governor Henrique Capriles Radonski, is at its strongest since 1999, buoyed by the more than three million people who voted in unprecedented opposition primaries in February.

Chavez’s influence has stopped growing because of “a combination of factors. The most important are the internal problems,” said Peter Hakim, president emeritus of the Inter-American Dialogue, a Washington think tank.

But Hakim also points to external factors, including recent political changes in Latin America, a region that he said is increasingly “pragmatic and moderate” and less inclined to radicalism.

The arrival in power of leftist leaders in Peru and El Salvador — Ollanta Humala and Mauricio Funes, respectively — has not translated into broader influence for Chavez either, said Venezuelan political analyst Maria Teresa Romero.

“From the start, both have distanced themselves: they didn’t want to be identified with the same radical political project,” she said.

Chavez also has toned down his positions in the region and, for example, mended relations with Colombia’s President Manuel Santos.

The Venezuelan leader has been highly critical of US President Barack Obama, but tensions have eased since president George W. Bush left office.

“Chavez has lowered his own pretensions of having an answer for the continent as a whole. The radicalism that he applied to the internal situations of other Latin American countries has visibly diminished,” said Romano.

Analysts agree that the uncertainty surrounding Chavez’s cancer also has weakened his image.

With tears in his eyes, Chavez beseeched God last week during an emotional Easter mass to give him life because, he said, he still had things to do, which only raised more doubts about the seriousness of his cancer.

“Due to his condition, countries (in the region) must think about future alternatives and the moment they begin to think about a world without Chavez, his position, almost inevitably weakens,” Hakim said.