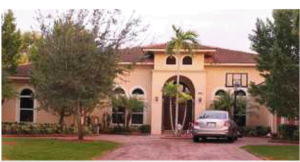 The home of Jude Celestin, the suspected heir apparent in Haiti’s presidential elections, is pictured on Thursday, Oct. 14.

Célestin mistress Tania Chihimie, who has long-time connections throughout the cocaine community in Haiti, purchased a home in Weston in 2006 — the height of the South Florida real estate boom — for $1.1 million, the records show. One would think that someone would question the source of the funds.

Earlier this year, the house was placed in foreclosure and the lender is seeking $1.06 million. The 5,117 square-foot home, which fronts a canal, has outstanding taxes of $13,961, Broward County records show.

The property was one of many homes that Célestin purchased in South Florida since 2002, and the second to be foreclosed on or threatened with foreclosure.

Célestin’s campaign said he was unavailable to discuss his South Florida financial dealings and referred questions to Chihimie.

“Mr. Célestin has had no dealings with the property in question,” the campaign e-mailed The Miami Herald on Wednesday. “He does not live in Weston, and is a resident and citizen of Haiti.”

In an e-mail to The Herald, Chihimie said she “takes full responsibility” for the Weston house and taxes. She said she obtained the loan through her employer, a bank in Antigua, and cited “confusion” over who should pay taxes and insurance on the property — she or the bank. Monthly loan payments were to be deducted from her fees, she wrote.

The details of Célestin’s personal finances have emerged as Haitian voters are deciding among a field of 19 presidential candidates. Which candidate will be best able to help manage billions of foreign aid dollars for earthquake recovery already features prominently in the campaign. The Jan. 12 quake claimed an estimated 300,000 lives and threw 1.5 million people into precarious camps.

Célestin, a 48-year-old bachelor, boyfriend of Preval’s daughter, has been considered Préval’s protégé. But the mechanical engineer is seen in Haiti as a political novice.

Despite his South Florida real estate investments, Célestin is one of just a few front-runners who has not stumped in Haitian enclaves in Florida and up the Eastern Seaboard — an opportunity for expats to learn about candidates and the candidates to fundraise. Political analysts have said it could cost millions to win the presidency.

Célestin’s presence looms over the tent cities and battered buildings of Port-au-Prince in ubiquitous green-and-yellow billboards and banners. A slogan in one sign reads: “100 percent for Haiti.”

On Wednesday, a few hundred showed up at a town plaza in Croix-des-Bouquets, a suburb north of Port-au-Prince, to hear Célestin, who made his first official campaign appearance. An earlier appearance, in front of the national palace, where 20,000 live in a tent city, boasted 40 bands. In spite of this attraction about 200 people attended, almost outnumbered by Celestin’s security team.

“They believe in a new generation where we are all part of it,” he said of the crowd of mostly young supporters. “Today, I represent Haiti. . . . This is a sign of reconciliation we are asking for. The sign of unity we are asking for.”

A Swiss-educated engineer, Célestin is credited with founding the government’s road construction company, the National Center of Equipments, or CNE, before he was tapped for the presidency. Created in 1997, the agency was tasked with clearing rubble in the weeks after the 7.0-magnitude quake as well as with trucking thousands of bodies to a mass grave outside Port-au-Prince.

Célestin financed the homes with two mortgages from World Savings Bank in San Antonio — $163,100 for the Bluewood Terrace property and $139,750 for the Stanton Drive home, which was later threatened with foreclosure.

The Célestin campaign said he “sought to expand his portfolio of investments. Real estate was among them, and some investments were more successful than others.”

In 2004, the first lien was filed against him. On Feb. 24, The Town Foundation, a Weston nonprofit board that oversees the city’s cable contract, filed a lien against Célestin for $402.68 on the Stanton Drive property. It was later discharged.

On April 6, 2004, Célestin sold the Bluewood Terrace home for $272,000. In 2008, he sold the Stanton Drive property to Rita Célestin Rancy, his sister and former special counselor to Haiti’s ministry of planning, for $340,000 after the lender started foreclosure proceedings, records show.

Célestin purchased the $1.1 million home now in foreclosure with Chihimie on July 21, 2006. She declined to say why they bought the home at 16340 Paddock Ln. together.

Chihimie said she obtained a $1 million loan for the home through her job as a consultant at ABI Financial Group, which owns Antigua Overseas Bank — the bank that issued the loan. Monthly loan payments were to be deducted directly from her fees, she told The Herald in an e-mail.

Such loans were not uncommon in 2006 at the apex of the housing boom but would be extremely hard to come by today.

In addition to owing mortgage and taxes on the home, the Saddle Club Estates Homeowners Association filed a lien on the property seeking to reclaim $2,366.90 from Célestin and Chihimie in unpaid homeowners’ fees.

In 2008, after the housing market crashed, Chihimie tried to sell the house.

“Following our recent telephone conversations and e-mail exchange, it is our understanding that you are currently exploring options to sell the property,” Carole Schlott Donelan, assistant manager of “Offshore Operations” at Antigua Overseas Bank, wrote Chihimie on Jan. 31, 2009. The letter is included in a Broward court file.

But by late summer any hopes for further leniency were dashed.

“We refer to your e-mail of 3rd September 2009 and regret the difficult circumstances and challenges you are currently faced with,” Donelan wrote Chihimie on Oct. 15. “The business of the bank, however, must continue and as such, the loan for USD 1,000,000 — which after several renewals and extensions has matured — should be repaid.”

Célestin and Chihimie had also failed to pay real estate taxes on the property from 2006 to 2008, records show.

The total the bank is now demanding from Célestin and Chihimie: $1,062,143.83. The Broward attorney for Antigua Overseas Bank, John Primeau, declined to comment.

Chihimie said she “takes full responsibility for the house.”

“I will be taking on this responsibility for this year’s taxes,” she wrote. “There was a confusion as to who would be paying the taxes and insurance on the property, the bank, or myself.”

5 thoughts on “CELESTIN AND HIS MISTRESS HAVE BIG FINANCIAL PROBLEMS IN FLORIDA. HOW CAN A GUY WHO HAS STOLEN $200,000,000 MISS HIS MORTGAGE PAYMENTS??”