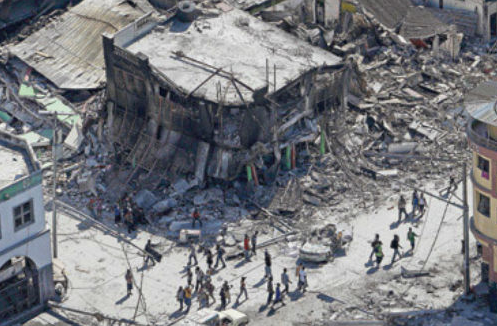 People walk among damaged buildings in Port-au-Prince, Haiti, after a 7.0-magnitude earthquake hit the country leaving thousands dead and many displaced. (Photo: AP)

KINGSTON, Jamaica – The Caribbean Development Bank’s (CDB) board of directors has approved a grant of US$3.5 million to pay Haiti’s catastrophe risk insurance premium for the coming year.

This marks the fourth year that CDB has provided a grant for the full payment of Haiti’s premiums on earthquake, tropical cyclone and excess rainfall policies.

Given Haiti’s fragility and high vulnerability to natural hazards, the CDB committed to paying its annual Caribbean Catastrophe Risk Insurance Facility (CCRIF) premiums, as part of the CDB country partnership strategy for Haiti for the period 2013-2016.

Haiti is still recovering from the impact of the 2010 earthquake, which caused more than 300,000 deaths, displaced over three million people, and made more than one million homeless.

As of January 2016, approximately 45,000 Haitians were still living in tents and makeshift shelters, with little or no access to water and sanitation.

The grant is reportedly being paid under the Eighth Cycle of the Special Development Fund, the focus of which includes promoting environmental sustainability and climate change resilience.

Haiti formally became a member of the bank in January 2007.