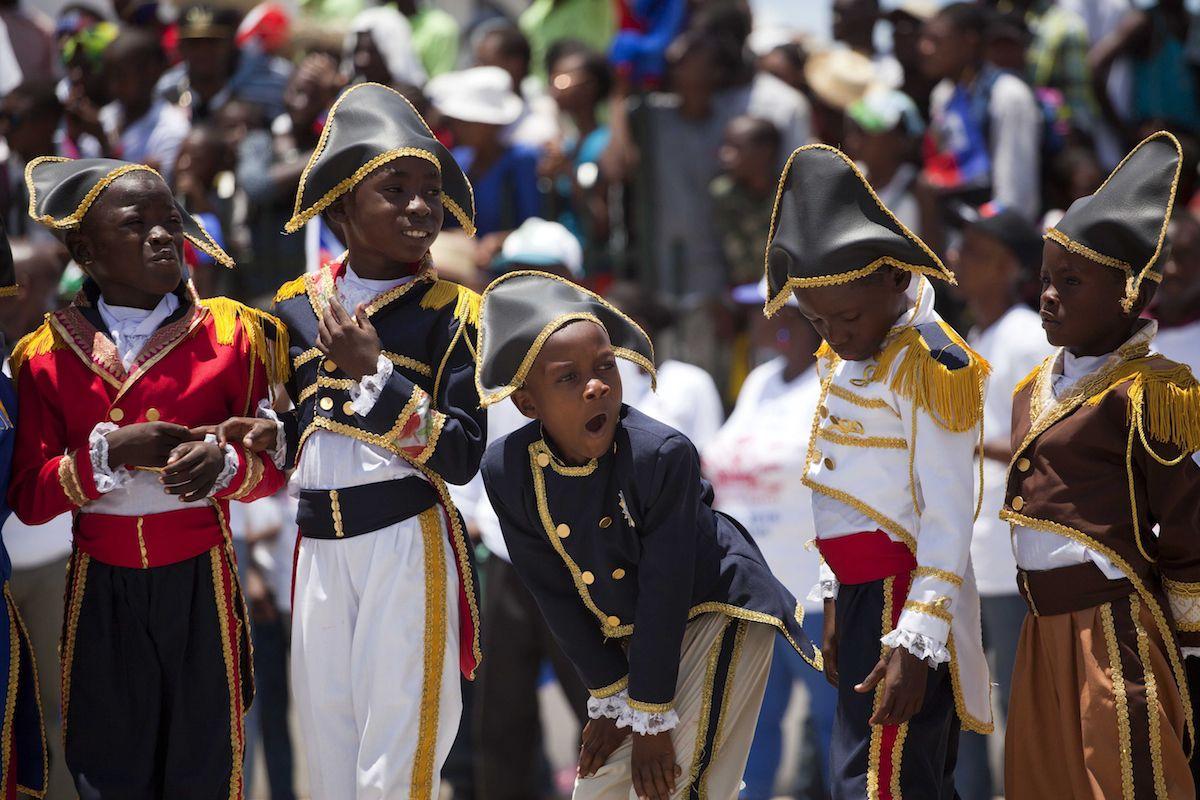 In this Wednesday, May 18, 2016 photo, youth dressed as independence heroes take part in a Haitian Flag Day celebration in Arcahaie, Haiti. Haitians celebrated the 213th anniversary of the creation of their national flag in Arcahaie. (AP Photo/Dieu Nalio Chery)

The Republic of Haiti has just celebrated its 214th year of independence. It was Jan. 1, 1804, when Haitian leaders said no to slavery and fought for and won freedom from not only slavery but also colonialism. This was long before independence became a reality for neighboring Caribbean nations. This was the focus for President Jovenel Moise on the first day of the New Year.

With his wife, Martine Moise, and Prime Minister Jack Guy Lafontant by his side, Moise gave remarks centered on the gift of their ancestors. “Freedom and independence have been the dream of our ancestors and it is thanks to their sacrifices that we have today become the people that we are,” he stated. “Thanks to their sacrifices and their courage, Haiti raises to the world the flag of emancipation, the right for all men, women and children to live as human beings.”

Despite all of the catastrophes and adversities, Haiti’s people continue to be very resilient. Of all of the catastrophes, none can compare to the earthquake of 2010 that destroyed most of the island. The news media flocked to Haiti then, and the constant reports of devastation beamed into our living rooms only conveyed a sense of hopelessness. It was painful for many of us who live in the United States to learn that more than 300,000 lives were lost, and we mourned for our Caribbean brothers and sisters and prayed for their recovery. This was followed by an outbreak of cholera that took over 3,500 more lives. Haiti always seems to be in the path of a tropical storm or hurricane. As recently as September, the nation experienced additional losses.

Since the late 1990s, the government of the Dominican Republic has denied citizenship to Haitians born in their country to people identified as illegal Haitian immigrants. The controversy continues to this day, very much like the illegal immigration issues here in the United States, but as Moise pointed out, “when there is failure or bankruptcy, the leaders and the political leaders must bear the responsibility.”

With aid from worldwide organizations, the Haitians have been able to overcome even when the odds seemed stacked against them.

The 2018 independence celebrations were highlighted by messages of congratulations from several dignitaries. U.S. Secretary of State Rex Tillerson congratulated Haiti on its independence. “The United States and Haiti share a long history of close relations, and our futures are even more closely linked through the nearly 1 million Haitian Americans who contribute to both American prosperity and the economic growth of Haiti,” Tillerson said. What he really wanted to say was, “and those Haitian refugees that we gave asylum to after the earthquake, we need to pack them up and send them back home to you.” But instead he said, “as a longstanding friend and partner, the United States remains committed to supporting Haiti as it strives to increase economic growth and investment, unlocking its full potential.”

Irwin LaRoque, secretary general of the Caribbean Community and Common Market (CARICOM), offered warm congratulations to the government and people of Haiti. He referred to the Haitian Revolution as the cause of the region’s success both socially and politically. He added that “Haiti has also made its mark on the Caribbean community particularly through its commitment to the welfare of people with disabilities.”

LaRoque also welcomed Moise as the new chairman of CARICOM and commended him for Haiti’s continuous journey of self-determination. He emphasized that the leaders of the region look forward to his leadership to provide an “enabling environment” for the advancement of CARICOM.