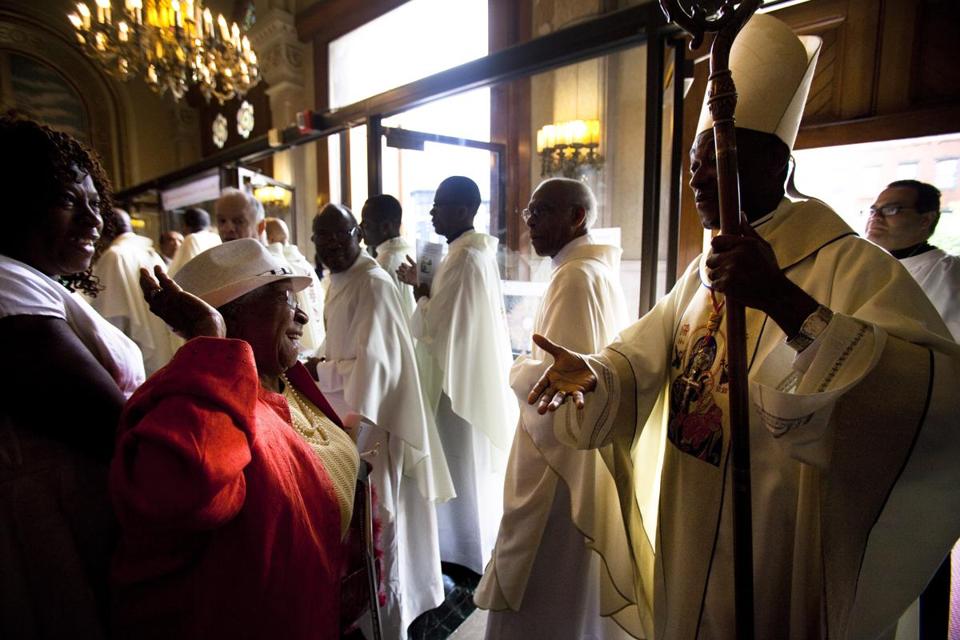 Clarisse Faveus, a former resident of the Haitian city of Jacmel, greeted Cardinal Chibly Langlois of Haiti at the Basilica and Shrine of Our Lady of Perpetual Help, also called the Mission Church, in Boston Sunday.

When she lived in the Haitian city of Jacmel in the early 1990s, Clarisse Faveus befriended a humble young priest who headed a nearby congregation. Impressed by his easygoing demeanor and seemingly permanent smile, she visited the priest’s church every day for three years before moving to the United States with her family.

When Faveus, now 88, reunited with her old friend Sunday, she hardly recognized him, because Chibly Langlois, the man she knew as a simple priest from a poor district of one of the world’s poorest countries, is now a prominent cardinal, widely celebrated by Haitians as a symbol of their resilience and hope.

Langlois visited Boston Sunday to celebrate the Feast of Our Lady of Perpetual Help, the patroness of Haiti. More than a thousand members of Boston’s large Haitian community filled the Basilica and Shrine of Our Lady of Perpetual Help, also called the Mission Church, beyond capacity, praying, singing, and dancing their way through a colorful and spirited Mass conducted in French and Haitian Creole.

“I knew him when he was a priest in Jacmel, and now he’s a cardinal,” said a tearful Faveus, who shared a warm embrace with Langlois as he proceeded down the aisle of the cathedral. “The minute he saw me, he remembered me. I was so, so happy, so, so excited. . . . It was like I was in heaven.”

For Faveus and other Boston-area Haitians, Langlois is something like a religious rock star. After Sunday’s Mass, he was mobbed on Tremont Street by ecstatic members of the Haitian Catholic community. Parents held babies aloft, passing them over the crowd toward Langlois, while others jostled and elbowed their way through to receive a quick blessing or even a fleeting touch.

“It’s a pleasure to meet the people, to celebrate with them, to give them the possibility to say thanks to God,” Langlois said in a brief interview. “I can see it’s a large community; the church was full of Haitians. It’s dynamic. We can do a lot with this community here.”

Langlois remarked on how, despite ongoing difficulties in Haiti, a hopeful feeling filled the church Sunday.

“The Haitian people always have hope, because we believe tomorrow will be better,” Langlois said. “And we saw a lot of hope today.”

When Pope Francis named Langlois as the first Haitian cardinal in January, he passed over two better-known and higher-ranking leaders of the country’s two archdioceses. The choice was widely interpreted as a message to the rest of the church’s hierarchy about Francis’s commitment to the disenfranchised.

“The reaction was over the top . . . it was so well-received,” Cardinal Sean O’Malley of Boston said of the appointment in an interview. “It was unexpected, but then, this is the pope of surprises.”

Francis “keeps talking about going to the peripheries,” O’Malley continued. “And in many ways, Haiti is on the periphery of people’s attention, but the church must be attentive to their suffering and their need. [Francis] wanted to make a statement by naming a Haitian cardinal.”

For Haitians, especially those who fled their home’s desperate economic circumstances to live abroad, the message was simple: We matter.

“It was such an honor. It meant everything because it had never been done before. We are lifted up” by him, said Mary Casseus, 54, who moved to the United States from Haiti in 1981 and came to see Langlois Sunday.

Upon being made a cardinal, Langlois told the Globe his mission included “opening the eyes and ears” of Americans to the plight of Haiti, which is still recovering from a devastating 2010 earthquake. Casseus agreed that Haiti deserves more international attention and aid; she was pleased that young US-born Haitian-Americans attended Sunday’s Mass because, she said, even they are not sufficiently aware of their roots.

“They were born here, so they never think about Haiti,” she said. “They need to learn about what they came from, because they are blessed to live here. They have the opportunity to go to school, to get a better education. This country, the [United States] gives them a lot. They need to be thankful.”

O’Malley said Langlois’s visit reinforces strong connections between the Archdiocese of Boston, which includes many Haitians, and the island nation, where the archdiocese has several charitable projects and partnerships.

For some Haitians, Sunday’s visit by Langlois was a taste of home.

“Today, this place feels like home. It’s like the cathedral in Port-au-Prince,” said 50-year-old Stoughton resident Even Bontemps, who moved to the United States 24 years ago. “It is very inspiring, because now we have a voice in the broader Catholic church. . . . I can guarantee in the near future, you’ll see the impact of Haiti’s belief system across the entire church.”

Dan Adams can be reached at dadams@globe.com. Find him on Twitter at @DanielAdams86.