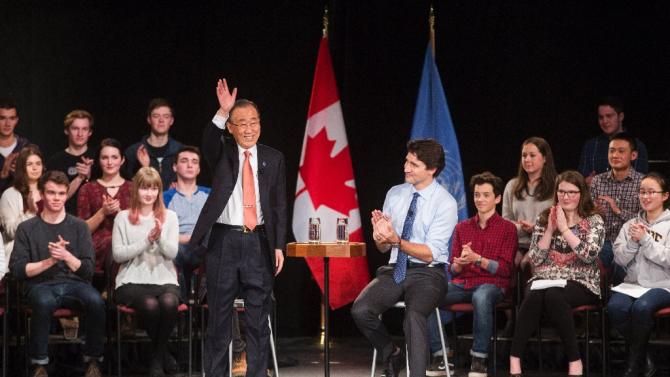 Montreal (AFP) – Canada is planning to take over command of the UN stabilization mission in Haiti and replace the bulk of troops on the ground from Brazil with its own, according to a report Wednesday.

There are currently 36 Canadian soldiers deployed on UN peacekeeping missions in Haiti, Jerusalem, South Sudan, Cyprus, the Democratic Republic of Congo and South Korea, down from a reported 3,000 at its peak in 1993.

French speakers in the Canadian military, Trudeau said in February, are in demand in hotspots in some former French or Belgian colonies, including Haiti and the Central African Republic.

In addition to expressing a desire for a seat on the Security Council, the prime minister said he wanted Canada to play a larger role in preventing and mediating global conflicts, as well as post-war reconstruction.

According to the daily Le Devoir, Canada wants to send 1,000 to 2,000 police officers and soldiers to Haiti to shore up security in the poorest nation in the Western hemisphere, and take over command of the UN mission from Brazil after its mission mandate expires in October.

The UN mission, MINUSTAH, was launched in April 2004 following the departure into exile of President Jean-Bertrand Aristide. The force was bolstered after the powerful January 2010 earthquake that toppled buildings across the country and killed tens of thousands of people.

There are currently 2,370 soldiers, 2,600 police officers, and 1,500 civilian officials on the ground in Haiti, both domestic and foreign, including five Canadian soldiers and 90 police officers.

Haiti has long been a priority destination for Canadian humanitarian aid. More than half a billion dollars (Canadian) has been committed for reconstruction and development of Haiti over the past decade, according to government figures.

There is also a large Haitian diaspora living in Canada.

Canada was a foundation stone of the entire UN Peacekeeping concept when, in 1956, the RCAF dispatched a team that became 115 ATU (Air Transport Unit) UNEF in the Sinai, Egypt when the Israeli/Egyptian Suez Crisis was mediated.

1conflict115 ATU patrolled the Armistice Demarcation Line between Israel and Egypt until withdrawn immediately before the 1973.