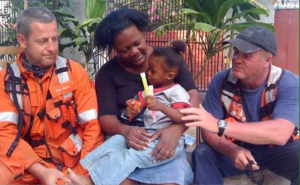 By Alastair Jamieson Published: 3:30PM GMT 23 Jan 2010
Dean Harris and Rudy Parkes from West Midlands Fire Brigade with two year old Mia whom they rescued after three days trapped in rubble Photo: PA
Sixty-two experts were scrambled to help with the biggest natural disaster since the 2004 Indonesian tsunami, pulled four alive from the rubble, including a two-year-old toddler called Mia who spent three days trapped in debris.
Mission organisers said it was the most difficult operation they had ever dealt with and was hampered by security restrictions.