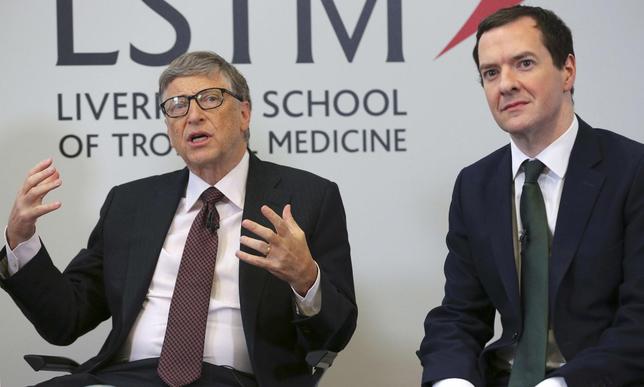 Microsoft co-founder Bill Gates (L) speaks as he sits with Britain’s Chancellor George Osborne during a visit to the Liverpool School of Tropical Medicine in Liverpool, Britain January 25, 2016.
Reuters/Dave Thompson/pool

Britain will spend 500 million pounds ($700 million) per year for the next five years to try and end deaths caused by malaria, the government said on Monday, announcing a partnership with Microsoft founder Bill Gates worth a total of 3 billion pounds.

Finance minister George Osborne announced the spending, which will be funded from the country’s overseas aid budget, at an event with billionaire Gates, whose Bill & Melinda Gates Foundation will also contribute around $200 million per year to the package.

“Across the globe over a billion people are infected with malaria and it’s a cause of both untold misery and lost economic potential,” Osborne said in a statement.

“That’s why, working with Bill Gates, I’m determined that Britain leads the world in the fight against this disease.”

In December, the World Health Organization’s annual malaria report showed deaths falling to 438,000 in 2015 – down dramatically from 839,000 in 2000 – and found a significant increase in the number of countries moving towards the elimination of malaria.

The United Nations now wants to cut new cases and deaths from malaria, a parasitic mosquito-borne infection, by 90 percent before 2030.

Osborne said some of the money would be spent in Britain to advance the science being used to combat the disease. The Gates Foundation first annual contribution will support research and development and regional efforts to eliminate the disease.

The Gates Foundation was launched in 2000 by Bill Gates and wife Melinda to fight disease and poverty around the world.