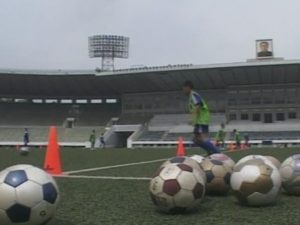 Holland’s (The Netherlands) surprise 2-1 upset over World Cup powerhouse team Brazil today in a quarterfinals match is being felt all over the world, for good and ill. But tragically, the loss and elimination of Brazil so greatly distressed an 18-year-old fan of the team in Haiti that he leaped in front of a car, killing himself, the AFP reports.

Haiti has its own national soccer (football) team, of course, but it did not qualify for the 2010 FIFA World Cup in South Africa. Qualifying for the world’s largest and most-viewed sports spectacle is, after all, an extremely difficult and time-consuming endeavor, even for traditionally well-funded teams, so it should come as little surprise that the ill-funded, earthquake-ravaged Team Haiti did not make it into the tournament this year. In fact, the January earthquake was utterly devastating to the team, killing at least 30 members of the organization, including several coaches and players.

So as a consequence, many soccer-loving Haitians “adopted” Brazil as their favored team going into the World Cup. As the Palm Beach Post reported: “When Brazil scored its first goal of the 2010 FIFA World Cup on Tuesday, a cheer went up that could be heard all over this earthquake-ravaged capital — and maybe all over the Caribbean.” Unfortunately, now Haiti’s hopes for its surrogate footballers have been dashed.

Sadly, the suicide of the as-yet-unidentified young Haitian because of the loss is also not an isolated phenomena. Brazil, being the winningest team in World Cup history, has many intensely devoted fans the world over, and a few are so enamored with the team that championship losses destroy their will to live.

Case in point: A 23-year-old Brazilian fan in India reportedly hanged himself after being verbally insulted by friends during the recent Argentina v. Mexico match (Team Argentina, which won the match, 3-1, is arguably Brazil’s greatest rival). Back in 2006, a Bangladeshi fan reportedly drank poison and died after France defeated Brazil in the World Cup quarterfinals that year.