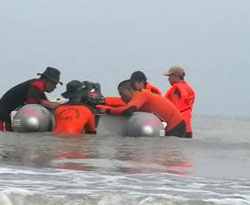 KINGSTON, Jamaica (AP) — The bodies of 10 Haitians were recovered from the ocean off the Turks and Caicos Islands on Sunday after the captain of a smuggler’s boat forced the illegal migrants into a rickety, overloaded boat near the reef-fringed shoreline, officials said.

The bodies of five Haitian women and five men were recovered by search-and-rescue teams, according to Morgan. It was not immediately clear whether there were any children on board.

“It appears that most of the dinghy’s passengers drowned,” Morgan said from the eight-island British dependency located between Haiti and the Bahamas. “These tragic events show just how dangerous it is to seek to enter the TCI illegally by boat.”

Morgan said survivors were being questioned by police but he could not say precisely how many survivors there were or how many migrants were believed to be traveling on the smuggler’s boat.

A number of arrests have been made and territory police are investigating, along with immigration and customs officers. It was not immediately clear if the captain of the smuggler’s boat was captured.

Larry Mills, the acting director of immigration, said in a Sunday statement that any would-be migrant coming to the Turks and Caicos Islands illegally is treated humanely but also questioned closely and returned home swiftly in accordance with the islands’ laws.

Haitians have been coming to the Turks and Caicos Islands for years, fleeing severe poverty and the social turmoil of the Western Hemisphere’s poorest country for jobs as construction workers, janitors, landscapers and bellhops in the U.K. territory of about 33,000. The immigrants form an essential low-income work force on the islands, laboring to build luxurious beachfront homes, collect trash and carry suitcases for tourists.

Many Haitians arrive here illegally by boat, paying roughly US$400 for the two-day journey across 125 miles (200 kilometers) of ocean.

In 2007, a migrant boat capsized near the Turks and Caicos Islands, pitching dozens of Haitians into shark-infested waters. At least 61 people died.

In 1998, Turks and Caicos Islands police allegedly opened fire on a boat packed with more than 100 Haitian migrants, touching off a capsizing that led to the drowning of dozens. Officials said the police fired warning shots and none hit the migrants or the boat.