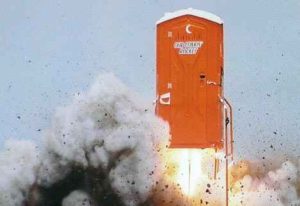 Desperately poor Haiti is finding a cheap source of fuel in recycling human excrement, a move that could help put a dent in a cholera epidemic and slow the country’s pervasive deforestation.

The “biodigester,” which converts organic waste to biogas and a liquid fertilizer rich in nutrients, requires little infrastructure: toilets linked to a sealed, brick-lined well connected to a basin.

Seventy of these devices are up and running, while another 70 are in the works.

Deprived of air, the bacteria thriving in human excrement eat 85 per cent of the refuse while producing methane gas, explained Martin Wartchow, pointing his lighter above a small tube hanging out of the tank. A powerful flame was immediately set ablaze.

“The remaining 15 per cent of organic waste is thrown out with the excess water in a green area where they biodegrade,” continued the hydrologist, who is working with the Brazilian non-governmental group Viva Rio in Port-au-Prince.

“Not a single chemical product is used and at the end of the line, the water we collect is completely clean.”

The engineer plunged his hand in a basin filled with filtered, clear and, incredibly, odourless liquid.

“We even raise fish here.” Recently completed at a Viva Rio centre that plays host to over 600 young Haitians each day, the installation is due to be linked to a cafeteria under construction to replace wood coals.

Indeed, engineers behind the project hope to reverse Haitians’ heavy reliance on wood fuel for cooking and heating due to the lack of cheap sources of energy in the country, the poorest in the Western hemisphere.

As a result, Haiti has seen rapid deforestation.

Only 1.5 per cent of the western portion of the isle of Hispaniola the country shares with the Dominican Republic is now covered with forests, a massive decrease from 80 per cent when discovered by Christopher Columbus in the 15th century.

“The United Nations have funded many studies to find solutions to replace wood coals. But all they had to do was to go to Nicaragua or China,” said Wartchow.

In Nicaragua, some 70,000 biodigesters have already been built, and 1,000 times more than in China.

The system, just now being implemented in Haiti, also provides a solution to simply and efficiently treat human excrement, a major problem in the squalid tent cities that sprung up after the devastating January 2010 earthquake, which killed more than 250,000 Haitians and left 1.3 million homeless.

The cholera epidemic exposed the dramatic consequences of Haiti’s lack of a true sewage system.

The water-borne bacterial disease, which thrives in unhygienic conditions, has claimed 4,700 dead so far.

“Since the epidemic, we have had many requests from clinics that had thrown their waste into the canals until then,” said Wartchow.