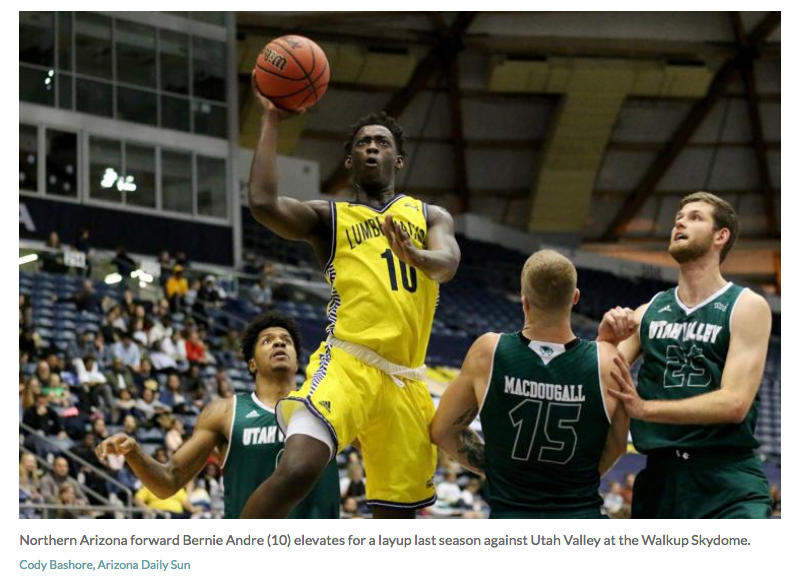 His family are native Haitians and his dad was a pastor for some time before moving to the United States before Andre was born.

After passing on a chance to compete with the Haitian men’s basketball national team once before, Andre knew he wasn’t going to miss the opportunity again.

“I think it’s a big deal to give back to my country and my people,” Andre said. “It can open up a lot of doors as well just to get seen by anybody with scouts being everywhere.”

Last season when Andre was preparing for his first season at Northern Arizona, the Haitian team was disqualified from the FIBA AmeriCup Caribbean 2021 prequalifiers due to a violation in FIBA’s definition of a player’s nationality — at the time claiming that players on the Haitian team were not Haitian nationals because they were born in the U.S. That goes against the Haitian constitution that states the athletes are Haitian because their parents were born in Haiti.

The team was in the middle of a long-awaited comeback to national basketball competition after a near-40-year hiatus, but FIBA cut the run short at four games — all of which Haiti won.

With the disqualification of 2018 in mind, Andre said he hopes he can help the team move past it and prove that they can compete with larger countries. Giving the Haitian people a spark to root for while the country still recovers from the earthquakes in 2010 is of massive importance to Andre.

“It’s been over 40 years since Haiti has been excited about basketball,” Andre said. “Just to get the Haitian community excited about it and going from there to just win would be amazing.”

Expect to see Andre with the Haitian national team again once practices and camps start back up after his showing in the August camp.

He said the team invited him back next summer for camps with a shot to make the team depending on how he does.

The offseason has given Andre a chance to work on his game a bit more against different levels of talent.

Before getting the chance to compete with high-level players at the Haitian minicamp in Miami, Andre held his own against some NBA talent at the Miami Pro-Am in late July. Andre went up against the likes of Derrick Jones Jr. and Bam Adebayo from the Miami Heat and Chicago Bulls guard Antonio Blackeney.

Andre was a multi-tooled player for Northern Arizona last season. He led the Lumberjacks in scoring at 13.8 points per game and rebounding per game at 8.4 per contest.

It was obvious before the season even started that Andre would make an impact, and he easily did, earning the Big Sky Newcomer of the Year award.

Andre shot a solid 33% from the arc on 29-of-88 total shooting — an area he said he has been working on this summer.

He said his stroke has been cleaner and that he started knocking down the 3-ball at a higher clip during the summer sessions.

“I’ve been having a good summer,” Andre said. “I’ve held my own against a lot of pros, and I felt that leading up to the mini camp that it helped me to play better then.”

Northern Arizona interim head coach Shane Burcar has raved about his team backing him up since Jack Murphy left in June, and Andre showed his confidence in his head coach.

“We’re already familiar with him from last year, so everybody is pretty comfortable with Coach Burcar,” Andre said.