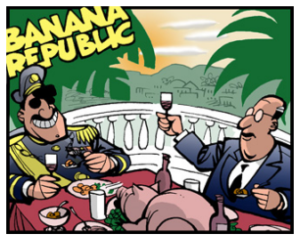 It couldn’t happen without the Dominican President’s approval!

This morning, Haitians awoke to hear comments, by a Dominican general, to the effect that he was looking towards the time when he would “take Haiti’s National Palace.”

Earlier comments, by this same tin soldier saw him moving reinforcements to the border areas, commenting upon the fact that Haiti was an occupied country.

What type of morons are running our neighbor’s government?

They have managed to obtain CARICOM’s censure for the Dominican government’s immoral cancellation of some 250,000 citizenship of people born, and raised, in the Dominican Republic, many who hold Dominican identity cards and speak nothing but Spanish. Their crime is a simple one. They have a Haitian heritage, or are suspected of having one. Some poor guy, born to a Dominica/Haitian couple, with the Haitian part

of the marriage dead and buried, found himself deported to Haiti where he has absolutely no relatives, speaks nothing but Spanish and was found sleeping by a road, with nowhere to go.

One must also recall the animosity and prejudice of the Dominicans against the Haitians who just happen to be their biggest trading partner.

Unfortunately, Dominican criminals/politicians did their best to rape Haiti in the days following our disastrous earthquake in 2010. Unfortunately, our Prime Minister Max Bellerive was more loyal to his Dominican masters than to his Haitian brothers. Bellerive has long been an agent for the Dominican Secret Service and answers to their call – whenever needed.

Unfortunately, he happens to be President Martelly’s cousin.

Nowadays, the fact that Bellerive prefers young boys over young girls does not seem a factor in the new world of Obama, so we will leave that element alone.

The fact that Bellerive signed hundreds of millions in illegal contracts, with his Dominican associates, days before he left the Prime Minister’s office is another thing.

Our present, unfortunate situation is based upon economic factors. President Martelly is trying to control the flow of uncontrolled contraband into Haiti. He must do this in order to gather taxes with which to pay for the functioning of our government.

This effort to control contraband has upset criminals/politicians/businessmen on both sides of the border. They would rather see Haitians starve than pay tax or have their containers enter duty free.

The Dominican President – what’s his name? – cancelled out on a meeting with President Michel Martelly.

Martelly should now play a Duvalier action. He should demand that any new meeting be held in the Haitian National Palace.

If he was really motivated, he could get the Dominican president, what’s his name? – to our palace and then be an hour, or so late for the meeting.

Let’s get a life and give the lives back to those the Dominican government has ruined by cancelling citizenship.

The Dominican general – who has threatened to invade Haiti – really lacks the balls required for anything of the sort. Words are cheap and it is easy to abuse a minority to take attention off the Dominican government’s incompetence in other areas.

Remember Adolf Hitler during the nineteen thirties when he used the Jews as an excuse and focal point for his vindictive tendencies. 6,500,000 Jews died.

People will die in the Dominican Republic. Already, many dozens of Haitians, Haitian/Dominicans, have already been butchered, their deaths covered up by the Dominican government. This tolerance will see an escalation in the murders.

Time for the International Community to step in. Perhaps the MINUSTAH could be expanded to encompass the DR into one big DR/Haitian blob. It was so, in the eighteen forties.