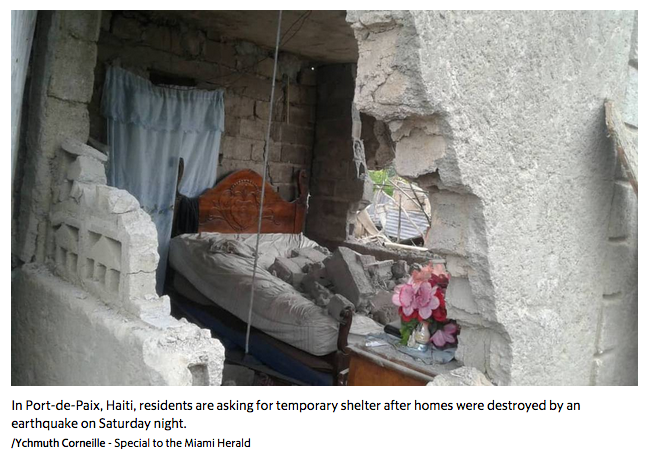 Edited by Haitian-Truth.org by adding quote below from PM Ceant.

Prime Minister Jean-Henry Céant said a crisis team has been created to coordinate all emergency responses to Saturday night’s earthquake.
“Damage has been recorded mainly in the Far North. All my sympathies to the victims,” Céant tweeted. “The executive at the highest level is mobilized to provide appropriate answers. I call on the population to be cautious and calm.”

At least 12 deaths have been confirmed following an earthquake in northwest Haiti, after a magnitude 5.9 earthquake shook the island late Saturday night, according to the U.S. Geological Survey.

At least five of the deaths were registered in the the Port-de-Paix area, Jerry Chandler, the head of the country’s Civil Protection disaster response unit, told the Miami Herald.

The earthquake occurred about 12 miles north of Port-de-Paix in northwest Haiti.

Haitian officials are expecting the death toll to go up and were preparing to deploy disaster workers to the area early Sunday. Eddy Jackson Alexis, the secretary of state for communications, said the ministries of interior and health had received reports of seven dead, including in Gros Morne, a community in the Artibonite region.

By sunrise on Sunday, the preliminary figures had climbed to 12 dead, scores of injured individuals along with dozens of homes and private buildings damaged or destroyed in the northern region of Haiti. There was no major damage, however, to government structures other than a cultural center in Gros Morne that collapsed, Civil Protection said in its early morning update on the situation.

“Search and rescue, and assessment still ongoing,” said Chandler, who had teams activated throughout the northwest and in Gros Morne. In some areas, efforts were being stymied by rain, which had flooded streets. 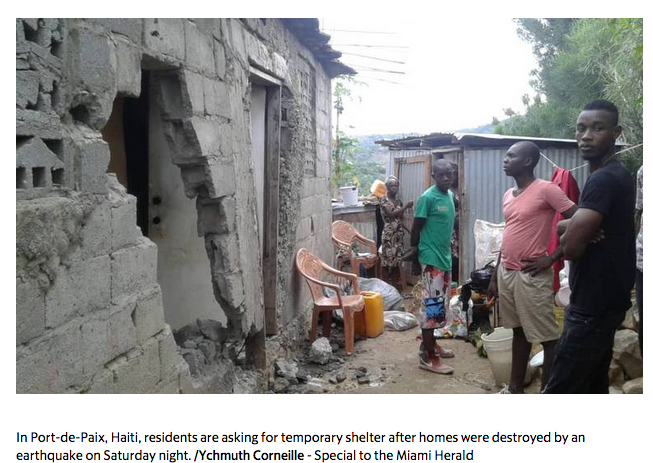 Tony Mondestin, the director for the ministry of health in the northwest, confirmed that the quake had created a panic inside government-owned Immaculee de Port-de-Paix hospital, forcing injured residents to seek care at private hospitals after the staff fled.

Mondestin said his report indicates that 162 people suffered minor injuries in the northwest region and eight were seriously injured. He said help had arrived from Port-au-Prince including an ambulance, a surgeon, a nurse and medical supplies.

“The only thing left to do now is install the tent and try to find a way to begin to give the population service,” he said. He said he was in the process of rounding up the hospital staff.

A port city, Port-de-Paix has a population of over 462,000 inhabitants. The principal mayor, Josué Alusma, is in hiding, accused by some in the population of orchestrating the death of one of two assistant mayors with a backhoe earlier this year. As as result, residents and public works employees were left to fend for themselves in the wake of the quake.

Tremors were felt throughout the country, triggering panic. At least two aftershocks were also registered, according to Civil Protection.

Last month after tremors were felt in Fort-Liberté, Cap-Haïtien and Grande Rivière du Nord, the director of the Bureau of Mines and Energy, Claude Prépetit, said in a press conference that northern Haiti, the west and Nippes regions, were most at risk for a major quake and warned Haitian authorities. A geological engineer whose office monitors seismic activity, Prépetit said Haiti’s seismic detection system had recorded about 26 earthquakes between 2.9 and 4.6 on the Richter scale during the first eight months of this year.

“I urge the population to keep calm, following the passage of the earthquake whose epicenter is located in the northwest coast,” Haitian President Jovenel Moïse posted on Twitter. “The [disaster] risk management system and the regional branches of the Civil Protection are on standby to assist the inhabitants of the affected areas.”

Minutes after the quake, reports started trickling in about houses, a Catholic church and the main police station in Port-de-Paix being destroyed or damaged.

“Civil Protection teams are hard at work across the country and especially in the northwest, where two minor aftershocks have been felt,” the office said in a release. It confirmed that no tsunami warning was issued in connection with the earthquake.

Just spoke to a journalist in Port-de-Paix. It’s raining. no doctors at the hospital & at least 2 dead. 1 in the city & another in Ile de la Tortue in today’s #Haiti#earthquake. @MiamiHerald