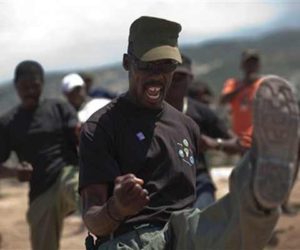 Haiti President Michel Martelly is recuperating from a blood clot in Miami. Meanwhile, busloads of former military soldiers stormed the grounds of Haiti’s parliament Tuesday demanding to speak with lawmakers.

Haitian President Michel Martelly is doing well, recuperating from a pulmonary embolism at a local Miami hospital, an adviser said.

Damian Merlo said the pulmonary embolism or blood clot in the lung, is a “side effect from [shoulder] surgery” Martelly underwent in Miami earlier this month. On Monday, Haiti’s presidential palace announced the president was flying to Miami to seek medical treatment.

“He is feeling well, just under observation,” Merlo said. “He is in good health.”

But while Martelly was recovering, in Port-au-Prince on Tuesday several dozen camouflaged former and wannabe soldiers forcefully entered the grounds of Haiti’s parliament. They were there, they said, to speak with members of Haiti’s lower chamber who were meeting to form a committee on the ratification of Prime Minister-designate Laurent Lamothe.

The soldiers arrived by busloads, and many of them were armed, according to international observers on site and radio reports.

The soldiers said they learned of a plan by Haiti’s minister of justice to use specialized members of the police to remove them from former military bases they now occupy throughout the country. They were opposed to the move, and wanted to speak with parliamentarians.

Levaillant Louis-Jeune, the president of the chamber of deputies, said “they were well-equipped and kept pressuring the deputies to go fast with the designated prime minister’s” ratification.

Merlo did not respond to questions about the parliament incident. The head of the United Nations Stabilization Mission in Haiti has long said that the issue of the ex-military personnel is a political issue that Martelly must defuse. There were U.N. soldiers in the vicinity and the incident did eventually calm down peacefully.

It is unclear how long Martelly, who canceled his appearance at the Sixth Summit of the Americans in Colombia over the weekend, will be out of Haiti.

Dr. Shirin Shafazand, a pulmonary critical care and sleep medicine specialist at University of Miami Hospital in Miami, said pulmonary embolism can be life-threatening if not treated immediately. She said it causes one of the branches of the arteries to be blocked and the person to be short of breath. There are a variety of reasons why someone could develop the condition, including recent shoulder surgery. It is also recommended that someone suffering from the illness not fly until they have been stabilized.

“Anything that immobilized the leg or the arm could potentially lead to it,” said Shafazand, who is not treating the president. “And if your arm is in a cast you are at potentially at risk.”

Martelly’s arm has been in a sling since the surgery.

“His life is not and never was at risk,” Merlo said.