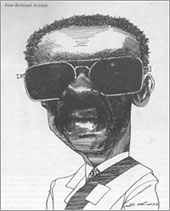 Key Lavalas leaders met with Jean-Bertrand Aristide at his 50 acre Tabarre estate to plan huge demonstration next Thursday at court where Jean-Claude Duvalier is scheduled to appear. Aristide is committing over $500,000 to insure success and has hired a number of RaRa bands to draw people into what could become a very dangerous and explosive situation.

Aristide, in effect, is creating a planned event and required a permit for this. He will not request a permit, so the event should be blocked by the police. If this is done, he plans a riot.

In any event, he has imported a bunch of human rights fanatics, who will focus upon Duvalier’s non-crimes while ignoring the real human rights crimes of both Aristide and Preval.

His team’s underlying goal is an accelerating move against the Martelly/Lamothe government with a short, medium and long-term plan to force Martelly from office and take power.

The International Community should open their eyes and watch the game. There are other elements in motion. Aristide has moved gangs from Belair and Delmas 2, relocating them in Peguy-Ville into and area called “Diegue” very close to Martelly’s home and the Ambassador of Canada’s residence.

A few weeks ago, Aristide, at another meeting, said he would have the power by March…not the Presidency for himself, but power for Lavalas/Lespoir/Inite.

6 thoughts on “ARISTIDE HOLDS BIG MEETING AT TABARRE TODAY TO PLAN HUGE MANIFESTATION AT DUVALIER COURT APPEARANCE NEXT WEEK AND ESCALATE THIS INTO ANTI-MARTELLY DEMONSTRATION.”