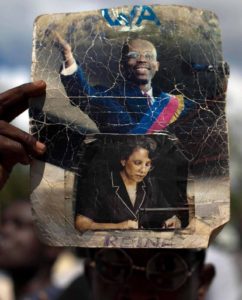 Chanting “No Aristide, no second round,” flag-waving and horn-blowing demonstrators marched through gritty slums and near the collapsed National Palace, which police protected with light barricades. There was no violence and the mood was festive, with loudspeakers blaring music and men drinking beer in the hot sun.

“We must have the return of Dr. President Aristide as a simple citizen to help us get better as a country, as a people,” said Eugune Mirthil, an unemployed 37-year-old who wore two photos of the ousted leader stapled to his white T-shirt.

Aristide, a former slum priest and Haiti’s first democratically elected president, fled the country on a U.S. plane in February 2004 amid a violent rebellion. He still retains strong support in this impoverished and often rudderless Caribbean country, particularly in the slums of Port-au-Prince.

Speculation that he might come back soared after ex-dictator Jean-Claude “Baby Doc” Duvalier made a surprise return in January after nearly 25 years of exile in France. The focus quickly turned to Aristide, who said last month he was ready to return “today, tomorrow, at any time.”

A U.S. State Department spokesman recently said Washington believes Aristide’s re-emergence would disrupt the peace ahead of the March 20 presidential runoff and urged him not to come back before then.

Maryse Narcisse, a leader in Aristide’s Lavalas party, said the former president would ignore the warning. Asked for specifics at the march, she smiled and shook her head.

“I cannot say when exactly, but he will be back before the March 20 elections,” Narcisse said.

Last week Aristide’s U.S. lawyer, Ira Kurzban, said he was confident Aristide would return before the runoff. Kurzban traveled to Port-au-Prince and picked up a diplomatic passport for Aristide that was suddenly issued by the government of outgoing President Rene Preval.

On Thursday, Foreign Minister Maite Nkoana-Mashabane of South Africa, where Aristide is living in a guarded government guesthouse, said officials there were “consulting with all interested parties to facilitate his return back home at the appropriate time.”

For 23-year-old Sheila Jean, who lives with her sister in a ragged tent in a plaza across from the National Palace, Aristide’s return can’t come soon enough.

“Under Aristide I lived in a house. It was a better life. Now it’s like the people don’t matter,” Jean said.

“I think Preval looks at me living over here every day,” she continued, peering at the crumbled white palace, the official residence of the Haitian president. “I look over to him, but he won’t do anything to help me.”

Many Haitians believe Aristide could arrive any day, heightening anxiety and anticipation as Haiti emerges from a political crisis more than a year after a devastating earthquake.

A former Lavalas deputy, Millien Fritzner, said Aristide is needed “to guide the party as an adviser even if he won’t be a politician again.” Aristide has said from South Africa that he wants to return only as an educator.

Fritzner accused the two candidates in the runoff, Mirlande Manigat and Michel “Sweet Micky” Martelly, of fearing Aristide because he is a “real leader.”

He also said global powers like the United States and France no longer have enough influence to keep Aristide in exile.

“The world has changed,” Fritzner said. “They don’t have as much power as they used to 10 years ago.”

1 thought on “Aristide backers march amid talk of Haiti return”