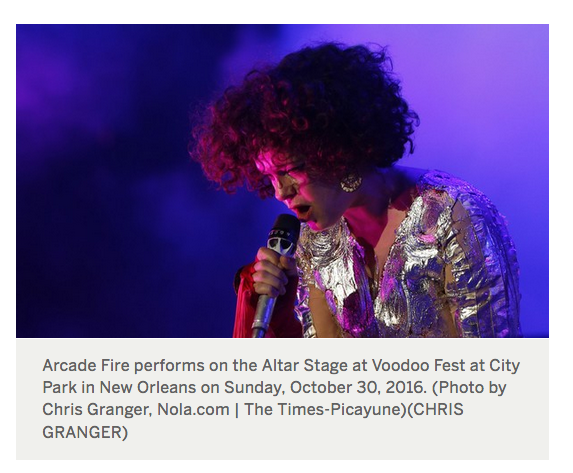 Look for the new Haitian-themed Krewe du Kanaval parade to begin in Armstrong Park at 2 p.m. Tuesday, Feb. 6. The parade will travel through the Treme on an unspecified route, passing by the Backstreet Cultural Museum, 1116 Henriette Delille St., at some point. The parade will be the highlight of a daylong festival. Peruse the complete Kanaval schedule below.

But first, the brief backstory. In early January, New Orleans resident rock stars Win Butler and Regine Chassagne, of the band Arcade Fire, announced that they’d teamed up with pals at Preservation Hall to bring a taste of Haitian Carnival culture to New Orleans’ Mardi Gras season. Their Krewe du Kanaval parade was originally meant to begin at the Preservation Hall music club and meander through the French Quarter, but the route has, as the first paragraph indicates, changed. The event’s original location in the narrow French Quarter streets made it difficult to properly gather, a parade spokesman said.

Arcade Fire performs on the Altar Stage at Voodoo Fest at City Park in New Orleans on Sunday, October 30, 2016. (Photo by Chris Granger, Nola.com | The Times-Picayune)

Canadian-born Chassagne, whose parents are Haitian, seems to be the parade’s principal promulgator. In a recent New York Times article she said: “I’m the one pushing for it, and I’m pushing for it because it’s the story of my parents, and the culture. Their culture is what made me who I am.”

A Haitian-themed Carnival parade in New Orleans seems natural because a huge wave of Haitian immigration to New Orleans in the early 19th century influenced the city for all time. Reports that President Trump made a coarse disparaging remark about the Caribbean nation within a week of the announcement of the Kanaval parade inspired further interest in the event.

Some eyebrows raised at the $1,000 to $5,000 cost to join the 150-member parading organization. But proceeds benefit KANPE, a Haitian charity and the Preservation Hall Foundation. In a brief interview in January, Preservation Hall owner and band-member Ben Jaffe said that enrollment was filling up fast. The group’s Feb. 5 founders reception is a private affair.

Octogenarian sax player Charlie Gabriel, a stalwart of the Preservation Hall Band and a descendant of long-ago Haitian migrants to New Orleans, will serve as the first Kanaval king. Soul singer extraordinaire Irma Thomas will be the first queen. The parade will include Haitian musicians and dancers.

Actually, there will be two parades. Here’s the schedule of events as provided by Kanaval:

In January 2016, Butler, Chassagne, and the Preservation Hall band staged a massively popular memorial parade for the late pop superstar David Bowie in the French Quarter. Sometime after, the couple released a music video of the event.

All the Ziggy Stardusts, Major Toms and assorted Young Americans were in full joyous stride.

At noon on Monday (Feb. 5) Butler and Chassagne released a song titled “Ann Ale! (Let’s go!) to accompany the parade.

Doug MacCash has the best job in the world, covering art, music, and culture in New Orleans. Contact him via email at dmaccash@nola.com. Follow him on Twitter at Doug MacCash and on Facebook at Douglas James MacCash. As always, please add your point of view to the comment stream.