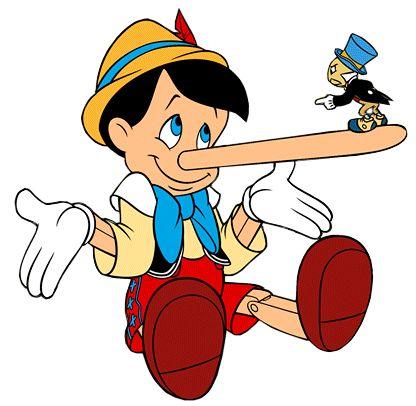 AP BIASED YET AGAIN!!! Divided, battered Haiti to hold elections, ready or not

PORT-AU-PRINCE, Haiti (AP) – Haitians will try yet again to elect a president this weekend despite the fact that much of the southwest is still in ruins from Hurricane Matthew, parts of the north have been battered by floods and the country remains in political disarray.

“The upcoming elections will be crucial for the democratic future of the country,” Interim President Jocelerme Privert said in a national address this week.

Sunday’s voters will choose from among 27 candidates for president, with the top two finishers going to a Jan. 29 runoff. They will also be electing 16 senators and 25 members of the Chamber of Deputies.

The electoral cycle began more than a year ago, but it’s been repeatedly derailed. A first-round presidential vote held in October 2015 was annulled after a special commission found it appeared to be tainted by fraud.

Privert, chosen by Parliament, remains in office even though his 120-day term ended in June amid posturing and delays by the deeply polarized country’s political class.

A redo vote was finally scheduled for early October. But that had to be scrapped when Hurricane Matthew devastated the country on Oct. 4.

Since then, roughly 250 storm-damaged schools and other voting centers have been mended. In some places tents will serve as emergency election stations.

The U.S. Embassy this week applauded “significant steps” taken by Haiti following Matthew to ensure that elections will be held. But the State Department still revised a travel alert, urging U.S. citizens in Haiti to exercise caution because “tensions remain high.”

Election officials are hoping to improve on the 26 percent turnout in the annulled round of voting last year, but they are battling election fatigue, voter disenchantment and obstacles facing residents in storm-ravaged areas.

“We know that people in the south part of the country are very much concerned about their survival, about food, about shelter,” said Rosny Desroches of the Haitian watchdog group Citizen Observatory for Institutionalizing Democracy. “For some people elections might appear as a kind of secondary concern.”

Some Haitians in the storm-impacted southwest say they resent being asked to vote as they struggle with basic necessities in Matthew’s aftermath.

“There are so many troubles. To me, it seems unfair to hold this vote now,” said Mario Jean Michel, owner of a small hotel in the shattered city of Jeremie.

But others say they’re eager to get elections over with, hopeful a new administration will better their lives and improve relief efforts.

“Everyone I know is ready to vote,” said Walna Gevere from the southwest town of Anse d’Hainault.

There’s no clear front-runner in the crowded presidential field. Polls are contradictory and unreliable. Some analysts believe the top contenders are Jovenel Moise, the leading candidate in the annulled 2015 vote and the choice of ex-President Michel Martelly, and Jude Celestin, a former state construction chief who led an election boycott last year after finishing second.

There have been fewer big rallies than during previous campaigns, and many of the election posters plastered around the crowded capital feature candidates who have long since dropped out.

Still, there has been an uptick in inflammatory rhetoric. Ex-President Jean-Bertrand Aristide, campaigning for the candidate of his Fanmi Lavalas party, recently called for “dechoukaj” – Haiti’s word for its own brand of mayhem – if the vote is unfair.

And complaints of rigged voting are common in Haitian politics.

“Allegations of fraud are a strategy that politicians regularly use, even with nothing to show as proof,” Uder Antoine, executive director of the electoral council, told The Associated Press.

Major presidential candidates have used youth-friendly cellphone apps to promise a jobs bonanza in an attempt to rally enthusiasm among young people in a country where the median age is 22.

Candidate Jean-Henry Ceant vows to create 100,000 jobs in 100 days. Lavalas hopeful Maryse Narcisse is promising a subway and cable car network in the capital’s metropolitan area. Celestin says the economy will grow a whopping 12 percent in his final year in office.

Specifics on how any of this would be accomplished are scarce.

“Candidates are promising things that only God could deliver with a miracle,” said 25-year-old student Edens Lanois Sincere, an aspiring economist.

David McFadden could me many things;  blind, ignorant of anything Haitian, or   suspected of taking cash to write biased material, damaging to the Haitian people.

Perhaps, the real answer is – HE IS ON MARS.

The decision is up to the knowledgeable Haitian reader.

Of course there is a front-runner and that is Jovenel Moise. 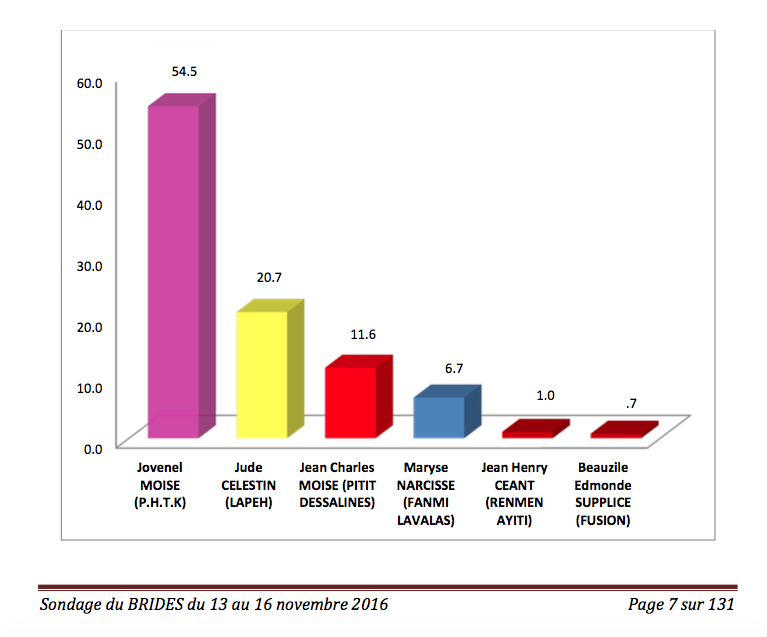 McFadden knows this, if he is in Haiti and has taken the time to wander around, talking to the peasants, businesspeople, or political operatives.
McFadden selects pictures showing Aristide candidate Narcisse with emphasis, even though she has minimal support. Something like 7% voted Narcisse in 2015. The present polls reflect the same, or slightly less.

McFadden has never reported any of the crimes credited to Aristide, Celestin or others.

His reporting has been biased, as has been the reporting of earlier AP people.

Michael Norton was owned by Aristide and followed the Lavalas line. His wife was Toto Bissainthe, an Aristide militant. I knew Norton very well and he never denied this. He simply thought that Aristide/Lavalas were the answer and did not hide his biases.

Perhaps, like Aristide he likes the smell of burning flesh??

Only time will tell.

Polls may not be 100% reliable, but they must indicate a tendency, if they all agree in general. 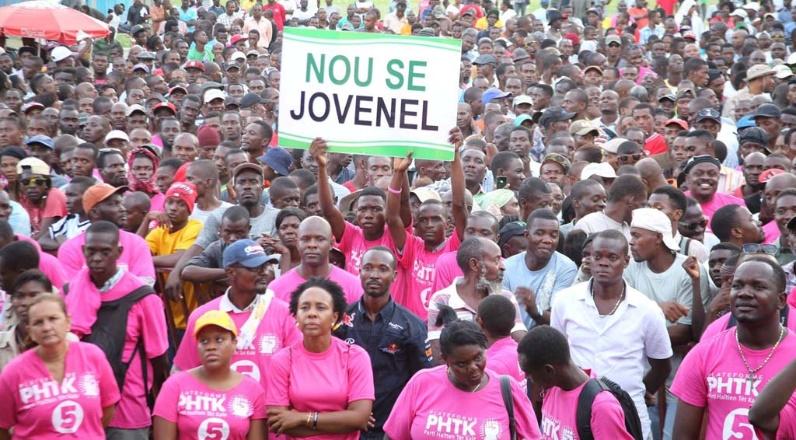 When Jovenel wins, the first thing he should do is throw the AP representative out of the country. 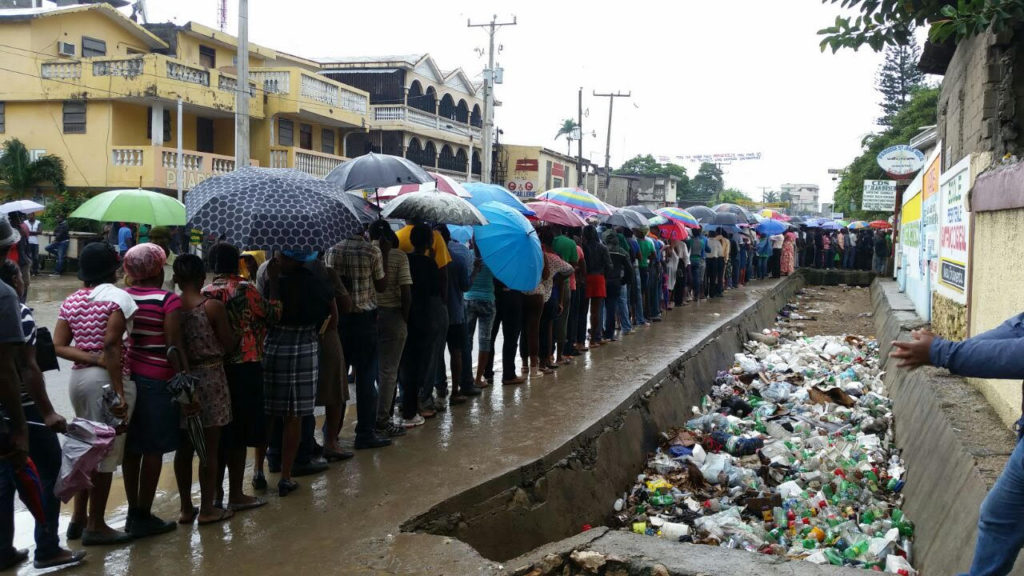 1 thought on “AP BIASED YET AGAIN!!! Divided, battered Haiti to hold elections, ready or not – Added COMMENTARY By Haitian-Truth”