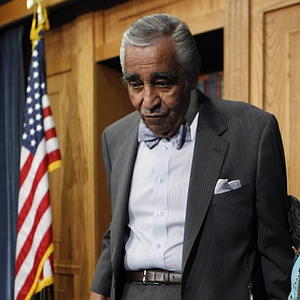 WASHINGTON — Calls for Rep. Charlie Rangel’s resignation rained down on Capitol Hill late Friday from House Democrats who said more than a dozen ethics charges against the 20-term lawmaker showed a disregard for the rules and undermined the public’s confidence in Congress.

The calls came as Democrats headed home for their monthlong recess wrestling with how to handle the tax and disclosure charges against Rangel back in their districts as election season loomed. Republicans, meanwhile, raced ahead with plans to make Rangel the face of corrupt Washington under the rule of Democrats who had vowed to clean up Congress.

For his part, Rangel met with perhaps his staunchest supporters, members of the New York state delegation, in the stately Capitol parlor named for the Ways and Means Committee that he headed until March.

“He indicated there was some sloppiness” in his official papers, Rep. Edolphus Towns, D-N.Y., told reporters, “but, you know, there’s no criminality here.”

House rules and credibility — not criminality — were the reasons cited by more than a half dozen House Democrats known to have called for Rangel’s resignation by late afternoon Friday.

A House panel on Thursday made public for the first time 13 charges of misusing his office and tax and disclosure violations against Rangel, 80, as it opened the trial phase of the ethics proceedings against him. If Rangel and the ethics committee do not settle the case, it goes to a public trial this fall, at the height of an election season in which every member of the House, 36 in the Senate and the Democratic majorities of both chambers are on the line.

“Too many politicians, both Democrats and Republicans, have fallen victim to the idea that they are ‘different’ than regular folks and nothing could be further from the truth,” Kirkpatrick said in a statement.

“It is our job as members of Congress to hold each other accountable to a higher standard regardless of party,” she added. “If the serious charges against (Rangel) are accurate, he needs to resign.”

“We’ve heard Charlie in the Ways and Means Committee, and he’s addressed these charges. He never denied they happened. He always has an explanation. You can excuse one or two, but not 13,” Yarmuth told the Louisville Courier-Journal in an interview published Friday. “I don’t see how he can stay if they’re true. I believe they are.”

Democratic leaders are urging their members to cast the election as one about a choice between their party, which under President Barack Obama has overhauled health care and Wall Street, and a GOP-tea party combination that wants to roll back Democratic accomplishments.

House Republicans relished using Rangel to change the subject — especially if he does not reach a settlement with the ethics committee. A public trial equates to a free media presentation of the misdeeds of one of the most senior Democrats in the House.

The House Republicans’ campaign arm released a list of Democrats who have not returned campaign contributions they received from Rangel during their careers and said those lawmakers would face questions about the matter from constituents during the August break.

“It’s very difficult for Democrats to make the case that this is a ‘choice’ election when the national headlines are focused around an ethics scandal that has clearly impacted the party in power,” said Ken Spain, spokesman for the National Republican Campaign Committee.

Rangel retained many supporters Friday. The New York delegation and the Congressional Black Caucus, which was co-founded by Rangel, urged their colleagues not to rush to judgment. House leaders eager to avoid alienating black voters remained mum on what Rangel should do.

Some Democrats privately said they took a small measure of comfort in one revelation. Rep. Gene Green, the Texas Democrat who led the four-member bipartisan panel of investigators, told reporters that his committee recommended a relatively mild punishment for Rangel — reprimand, a statement of wrongdoing voted by the whole House that carries no other penalty.

But statements continued to trickle out that left no doubt that at some point, Democrats would have to look out for No. 1 – themselves.

“If at the trial’s conclusion Mr. Rangel is found guilty by his peers, then he should incur the full punishment allowed by the House, including removal from office,” said Rep. Bobby Bright, D-Ala.