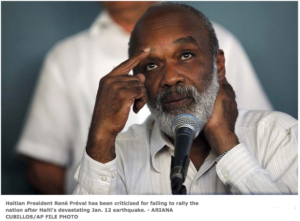 Haitian President René Préval has been rightly criticized for his refusal to rally the nation after Haiti’s devastating Jan. 12 earthquake.
Crisis thrusts greatness on leaders. But it can also be merciless in exposing weakness.
Since Haiti’s catastrophic earthquake struck Jan. 12, President René Préval – once welcomed for his calm and quiet manner – became a silent shadow on the chaotic landscape, convincing many Haitians they are alone and adrift.
At a memorial service at a rural gravel pit that is now a mass grave for earthquake victims, mourners railed at Préval earlier this week, telling reporters: “We need someone new to take charge here … someone competent.”

As discontent simmers, the United Nations has called the situation “volatile,” and a senior peacekeeping official, Edmond Mulet, chided Haiti as well as the world community for failing repeatedly to build strong institutions and foster development.
Though international officials refrain from pointing fingers directly, doubts about Préval’s leadership have deepened, and some look anxiously at Haiti’s two-century history of instability in fear of sliding back to the future.

COMMENT: Mulet, and other UN officials, have had years to make a difference and have failed – totally. Now, in retrospect, they have criticisms, but absolutely no type of plan for the future. Haiti is on autopilot.–

“Since 1804 Haiti has had 30 coups and 20 constitutions,” says Robert Muggah, research director of the Geneva-based Small Arms Survey.
“Préval came to power at one of the more turbulent periods, but in the last two years there has been more stability and a sense of optimism.”

COMMENT: There has been no stability and no sense of optimism.  These views have been perpetuated by the UN in order to justify their continued presence. They derailed the 2006 electoral process and put Preval in power by rigging the returns – PUBLICLY!!  The people hate Preval, a puppet of the UN.–

That appears to be ebbing now, along with faith in the political system.
Most would agree that Préval, 67, is entitled to feel shock and trauma, with his presidential palace in ruins, and friends and colleagues dead or disabled. But his failure to rally the country at a time when it is gravely wounded is a blow to both Haitians and foreign supporters who hope for a rapid recovery.

COMMENT: Preval was drunk and hiding in his wife’s house, even as his Prime Minister – Bellerive – ran for the Domincan Border with $8,000,000 in an aluminum case. He was arrested and returned to Port-au-Prince.  Preval is a weasel who plans to derail aid material so he can blame the Americans/Canadians/French for problems and bring in Chavez/Castro etc…–
“Préval is the legitimately elected president of Haiti, and the obligation of the international community is to assist him and Prime Minister (Jean-Max) Bellerive in fulfilling their leadership role,” says Mark Schneider of the International Crisis Group.
Most members of the international community are at pains to avoid undermining Préval’s role in a country that is politically as well as physically fragile.

COMMENT: Preval was not legitimately elected. The Constitution requires a run-off between the two top candidates, unless one receives 51 percent of the vote – first round. Preval got 23%. The MINUSTAH people, along with Rene Momplaisir and Rene Preval (all other candidate excluded from discussion) gave Preval 51% in order to avoid a run-off. MINUSTAH is responsible for today’s disaster.–
Haiti’s international backers say they are working closely with the Haitian government on reconstruction plans. But Préval’s invisibility after the earthquake has triggered so much anger among Haitians that political violence is once more rumoured.
“I can think of no country in the world that would have so pathetically handled the post-earthquake situation,” says Larry Birns, director of the Washington-based Council on Hemispheric Affairs. “It’s a caricature of what a government is supposed to be.”
Haiti’s millions-strong diaspora is also exasperated. Groups of North American activists and intellectuals are hoping they can help to fill the leadership vacuum.

COMMENT: Just what we need, more intellectuals giving ponderous advice in Haiti. Where have they been since Preval and MINUSTAH raped the country. Where were they when Preval stole all aid – money/goods – from the 2008 hurricane disaster. He calmly stole $198,000,000 in cash from the Petro-Caraibe account and they were silent.–
“I view Préval as a good guy,” says Ludovic Comeau of De Paul University in Chicago, a former chief economist at Haiti’s central bank. “But it breaks my heart to see how disappointing he is. He just doesn’t have what it takes.”
In a Haitian television interview last weekend, Préval apologized for his vanishing act, saying that “a president is also only a human being and the worst pain is silent,” and admitting that he felt “defeated and powerless.”
It’s not what voters hoped for when they elected him in 2006 for a second time, after years of internal strife and external interference that ended with the exile of his close ally, ex-president Jean-Bertrand Aristide.
Although known as Aristide’s “twin,” Préval lacked the former priest’s charisma and rhetorical flourishes. A mild-mannered pragmatist who spent years overseas and earned a degree in agronomy in Belgium, the diminutive intellectual was described as shy, loyal and self-effacing in his early political career.

COMMENT: Preval has no degree in agronomy. He was a drop-out. He is no intellectual. He was a failed baker, along with his Prime Minister Pierre-Louis. He is not a good guy. He tortured prisoners during Aristide’s first presidency and was directly involved in the assassinations of Mireille-Durocher Bertin and Jean Dominique, plus a hot of others. He runs the major gangs in Haiti – personally!  He tried to save one of his gang leader/killers  Amarol Duclona by giving his a false passport and hiding him in the Dominican Republic. He was arrested and sent to France for the Preval ordered assassination of the French Consul.–
But in his last three years in power, Préval won the West’s confidence, and Haiti enjoyed modest growth. At the same time, his electoral council blocked 15 political factions, including Aristide’s popular Lavalas Family party, from fielding candidates in an upcoming legislative election that has now been postponed. He was accused of trying to garner a parliamentary majority in order to make constitutional changes to strengthen executive power, and to allow himself a third term in office.

COMMENT: The West must have its head up its ass if they  have confidence in preval! He has controlled the CEP – Electoral Council – so he can fix elections He has paid most members of the Chamber/Senate to maintain control.–

But change may be in the offing, says Comeau, a founder of an expatriate network which is planning an international conference to seek ways of making use of the diaspora’s skills.
“We are at ground zero now,” Comeau says.
“We don’t want to go back to the bad old days, and we must act in the context of democracy and stability. But we have to make plans, and we’re in a hurry.”

COMMENT: Boy, just what we  need is some sort of international conference of Diaspora intellectuals to plan Haiti’s future. They should spend a few weeks here, before offering any bird-brained suggestions.

1 thought on “Analysis: Is Haiti’s René Préval buckling under? He should resign! Commentary added in article”