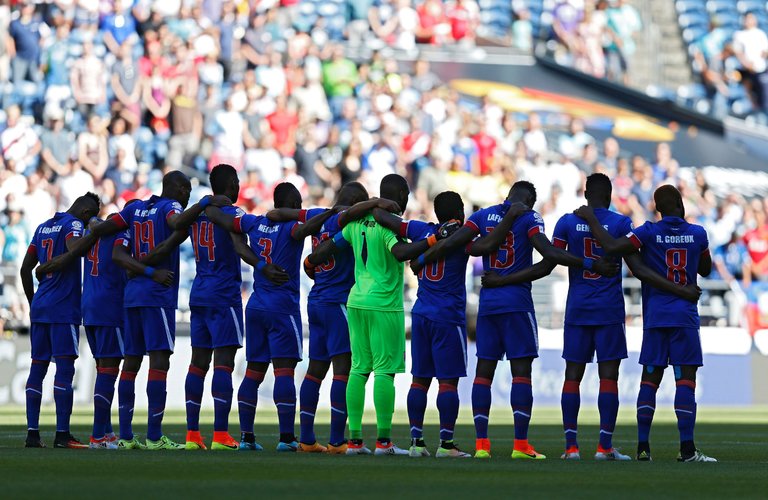 Haiti’s national soccer team held a moment of silence in homage to Muhammad Ali before a match against Peru at the Copa América Centenario soccer tournament in Seattle on Saturday. Credit Jason Redmond/Agence France-Presse — Getty Images

Haiti’s national soccer team botched several scoring chances Saturday in Seattle, lost a 1-0 heartbreaker to Peru in the Copa América Centenario, and then boarded a 2,500-mile flight to Orlando, Fla. — where mighty Brazil awaits on Wednesday night in a probable mismatch.

This clearly is not the happiest of situations, nor one necessarily conducive to success. Yet the experience is a relative joy ride for the Haitians, who are the underfinanced minnows swimming among pampered sharks in this month’s tournament.

Who needs money, several players said on the eve of the Copa, once the national anthems are played and the ball is in play?

“For us, we see the country first,” said Pascal Millien, a forward for Haiti and for the Jacksonville Armada of the North American Soccer League. “We hear the money the U.S. players are making, the Brazil players are making.”

They tell themselves that they would like to make that money, too.

“But we do it for the love and for the country, for the game we love,” Millien added after a training session in Bradenton, Fla., that preceded Haiti’s trip to Seattle last weekend. “God blesses us by letting us play this game, and we give the country something back.”

At times, money is the least of Haiti’s problems. The team’s coach in 2003, Fernando Clavijo, was able to spend only about a week scouting players on subpar fields in the tiny country after he was named to take charge of Haiti’s World Cup qualifying campaign that year. But after he heard gunshots outside a stadium one day, he decided his players should train in Florida — or basically anywhere other than at home. 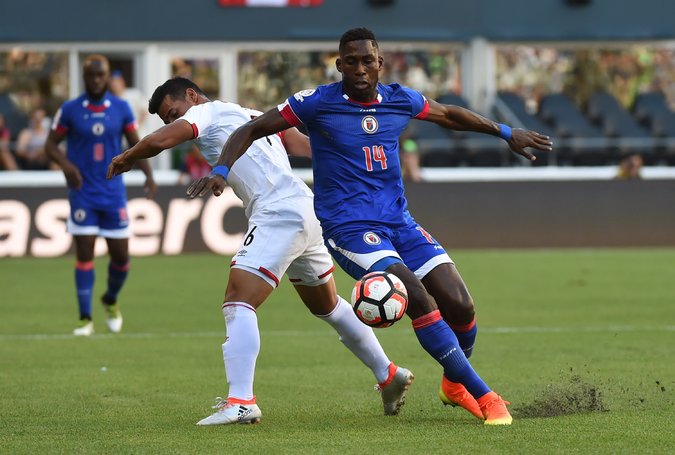 Several years later, a few domestic-based national team players were in Haiti during the devastating 2010 earthquake. One, midfielder James Marcelin, could not be located in Port-au-Prince for weeks until he was eventually discovered and brought to America by friends. These days Marcelin plays for the Carolina RailHawks, another N.A.S.L. team, but the conditions of his work visa mean he cannot leave the United States — even for league games in Canada, or to return to Haiti — because if he does, he fears he will not be allowed to re-enter.

“It’s a miracle for us to be a part of this, and a miracle we’ve survived,” Marcelin said. “The hope is there. We just have to push ourselves. Not by saying it; by working hard for it. We know the feeling is that there’s a lot of countries better than us. We just have to put in the work.”

It was a fluke goal by Millien in a playoff against Trinidad and Tobago in January — a hopeful cross that somehow eluded a teammate, a defender and the goalkeeper — that allowed Haiti to qualify for the Copa América. The tournament is most high-profile soccer stage Haiti has appeared on since it participated, just as improbably, in the 1974 World Cup.

“I was like, ‘Wow, did it really go in?’” Millien said of his playoff goal. “I have no way to describe how I felt. Now we play the senior Brazil side for the first time ever, in one of the biggest tournaments in the world. We talk about this every day.”

This is serious business, and the Haitians have a deadly serious coach in the Frenchman Patrice Neveu, who previously headed the Niger and Congo national sides. Neveu, who assumed the reins shortly before Haiti’s playoff match against Trinidad and Tobago, rides the players hard. A few acknowledged that they were not necessarily accustomed to such demanding treatment; several called him aggressive, and said his temperament required an adjustment.

In every way, the Haitians remain the ultimate underdog on Wednesday. Haiti is ranked No. 74 in the world by FIFA; Brazil, a five-time World Cup champion, is No. 7. Haiti has about 10.3 million people; Brazil’s population is 200 million. And while Brazil has its own problems of style and expectations, it is considered a favorite to win the Copa, even without the star forward Neymar.

Get the big sports news, highlights and analysis from Times journalists, with distinctive takes on games and some behind-the-scenes surprises, delivered to your inbox every week.

The contrast in resources and support for each team is the most obvious difference between them, but there is also the matter of compensation, or, in Haiti’s case, the lack thereof. While many of the Brazilians make their living playing for rich European clubs, the mostly minor league Haitians began their preparation for the Copa América by receiving $200 to $300 each as a per diem and were still trying to negotiate a slight raise.

Haiti’s team is a mixed bag of professionals. Four players performed recently in the top French league, while others have played in places like India and Vietnam. Midfielder Soni Mustivar is a member of Sporting Kansas City in Major League Soccer, and five Haitian players are under contract with N.A.S.L. clubs.

To ensure that Haitians eager to support their team enjoyed both access and a sense of community around the Copa matches, the United States national team forward Jozy Altidore, the son of Haitian immigrants, recently arranged for public broadcasts of the country’s games, and others, through a foundation bearing his name. Big screens were imported from Miami and set up near schools in a program created in conjunction with the St. Luke Foundation for Haiti.

“Usually, you’d have hundreds of people crowded around a small screen,” watching on television, said Wynn Walent, the assistant national director for the St. Luke Foundation. “Our students who walk several hours a day to school will get a chance to watch this in a beautiful place on a big screen.”

Altidore is missing the Copa América because of a hamstring injury, but he said that he can appreciate just how different, and how difficult, it is for the Haitian players to succeed.

“People don’t realize when they sit and watch, they don’t understand what goes into this beforehand — the hotels, the nutrition, the physios,” he said of competing internationally. “All these things play a part and haven’t been available for Haiti. When you consider the obstacles in their way and look at how the product on the field has improved, you wonder how good they could be.”

On Wednesday, the Haitians will get a quick reading on their soccer evolution, measured by the opponents in yellow, green and blue uniforms: