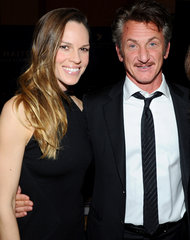 12:19 p.m. | Updated Among the things the Bagger did not expect to see in the lead-up to the Golden Globes: Dennis Kucinich and Kim Kardashian in the same room; Bono selling his guitar; Hillary Clinton giving a shout-out to Sean Penn and the Arcade Fire.

But all of that and more happened on Saturday night, at a gala dinner organized by Cinema for Peace, a benefit for Haiti two years after its devastating earthquake. Mr. Penn, a founder of the J/P Haitian Relief Organization, earned a humanitarian award for his work in that country, and was offered the job of ambassador at large by the Haitian foreign minister. “I do accept,” Mr. Penn said from the stage, so that he can change being called, well, you probably have an idea “to ‘hey, Mr. Ambassador.’”

Along with Representative Kucinich (whose wife, Elizabeth, is on the board of the J/P Haitian Relief Organization) and Ms. Kardashian (whose future husband may be on some sort of board, possibly a surfboard somewhere), the event drew an impressive roster of celebrities: Demi Moore and her daughter Rumer Willis; Melanie Griffith; Leonardo DiCaprio; George Clooney; Julia Roberts; Orlando Bloom; Mel Gibson; James Gandolfini; Garry Shandling; Salma Hayek and François Pinault; Hilary Swank; Josh Brolin and Diane Lane; Dustin Lance Black, the Oscar-winning writer of “Milk” and this season’s “J. Edgar”; and the Bagger’s pal Felicity Jones, who was excited at seeing her first auction.

It was, we admit, a pretty exciting auction: among the lots was Bono’s customized guitar, which sold for nearly half a million dollars to the Irish singer Damien Rice, who also performed. With a donation from Oprah Winfrey, who in a video message offered to match any contributions up to $2.5 million, the event raised $5 million.

Hillary Clinton, whose counselor and chief of staff, Cheryl Mills, was honored with an award, also appeared in a video, thanking Mr. Penn and Arcade Fire, the Montreal indie band, for their contributions to the relief effort. (“Arcade Fire is probably the only band to receive praise from Paul Krugman,” she noted, which is not exactly true.) Bill Maher served as an emcee, and he kept the right tone, hopeful and slightly acerbic. “I think 2012 is the year we’re going to get Haiti back on its feet,” he said onstage. “And next year, Detroit!”

(He also didn’t waste an opportunity to riff on awards season topics. “Cynical people say you can’t wear a dress and project strength,” he said, “but J. Edgar proves them wrong.” Mr. Clooney, he hoped, would win a prize this weekend. “Because without awards,” Mr. Maher said, “there is no light in his life.”) 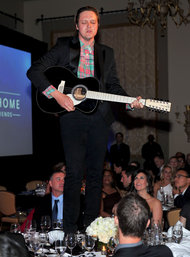 But the most electrifying moments came courtesy of Arcade Fire. The band, led by Win Butler and his wife, Régine Chassagne, who is Haitian, have been donating a few dollars from every ticket to Haitian relief efforts. “We’re just a stupid indie rock band from Montreal, and just from that initiative, we’ve been able to raise millions of dollars,” Mr. Butler said from the stage, when the band received an award. “It’s really a mistake to think of Haiti as a place where an earthquake happened to it,” he added. “The earthquake really revealed what was happening there.”

At the end of the night, Arcade Fire performed a few songs, including “Haiti.” With just his wife and Marika Anthony-Shaw on violin accompanying him, Mr. Butler unplugged his guitar and wandered around the room as he played, clambering atop the dinner tables still covered with silverware and glasses. The seated guests cheered him on. It was an unplanned moment, he told the Bagger afterward – at awards shows, he said, you have to shake things up.

The evening was so full of good spirits that no one wanted to leave, a rarity for a benefit dinner. After it ended, guests hung out in a hallway outside the ballroom, drinking and (in Mr. Penn’s case) smoking. Onstage, Mr. Butler had called on the crowd to simply collaborate in offering help. “Everyone just talk to each other,” he said, “and try to magnify each others’ efforts.” On Saturday night, they did just that.