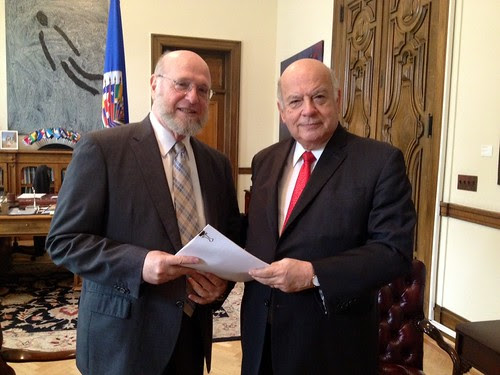 The Secretary General of the Organization of American States (OAS), José Miguel Insulza, today received the Permanent Representative of the Dominican Republic to the institution, Pedro Vergés, who delivered the text of the “Law 169-14 which establishes a special regime for people born in the national territory irregularly registered in the Dominican Civil Registry and on naturalization,” enacted by President Danilo Medina on May 23, 2014.

Secretary General Insulza expressed his gratitude and recognized the great efforts taken by the government of President Medina to remedy the problems created by the ruling of the Tribunal Court TC/0168/13. Insulza expressed his hope that the law and other measures adopted on the issue will open a path so that all people affected can find a dignified place in Dominican society.

For more information, please visit the OAS Website at www.oas.org.

The Naturalization Law is a response to the Constitutional Court decision (TC-168-13) of September 2013 against Juliana Deguis Pierre which retroactively altered the criteria for obtaining nationality for those born in the Dominican Republic of foreign parents between 1929 and 2010, stripping thousands of people of their nationality. The new law provides a remedy to a small group of victims – namely the 24,392 who were previously included in the Civil Registry. However, the law confirms that the vast majority of Dominicans of foreign descent will continue to suffer discrimination.

“The law does not address the magnitude of damage done by last year’s court ruling, which left tens of thousands of Dominican citizens adrift in one of the most discriminatory rulings ever made by a superior tribunal,” said Kerry Kennedy, President of the Robert F. Kennedy Center. “We needed an armada of lifeboats; instead the Dominican government threw down a single rope.”

Read in conjunction with the National Regularization Plan, the Naturalization Law formalizes the denial of birthright citizenship to the children of foreigners who were never enrolled in the Civil Registry, in many cases due to the state’s practice of withholding birth certificates from Dominicans of Haitian descent. The new law also denies birthright citizenship to those born between 2007 and 2010 that have been arbitrarily registered as foreigners. According to an audit of the Civil Registry by the government, there are approximately 21,449 people in this second group.

The majority of both groups are Dominicans citizens of Haitian descent, by virtue of the jus soli regime (automatic citizenship by birth) which was in force until 2010. Nevertheless, these Dominicans must now self-report as foreigners and submit to a process of “regularization,” which may eventually lead to naturalization. Even should individuals from the groups succeed in obtaining naturalized citizenship, they would not enjoy the same rights as Dominicans born in the country. Moreover, until they are naturalized, they will remain stateless and without the right to vote or access to basic services like other Dominicans.

“In its current form, the ‘Naturalization’ Law is an illusory title because it does not recognize the right to nationality for the vast majority of Dominicans of Haitian descent,” said Santiago A. Canton, Director of RFK Partners for Human Rights. “The government has chosen to continue with its discriminatory policies, making it imperative to look to supranational bodies to defend the thousands of Dominicans who continue to face severe discrimination.”