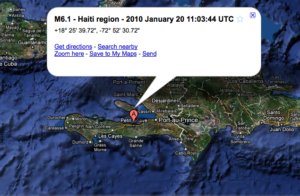 By Fred W. Baker III- American Forces Press Service
PORT-AU-PRINCE, Haiti, Jan. 20, 2010 – An early morning aftershock shook the sleeping soldiers here from their bags as the building swayed and creaked for a few seconds.

“It was like: ‘Whoah! Is somebody shaking me awake or was the ground moving?’” said Army Maj. J.T. Eldridge, the squadron operations officer for the 1st Squadron, 73rd Cavalry Regiment, 82nd Airborne Division.   Local reports put the aftershock at magnitude 6.1, but it lasted only a few seconds just after 6 a.m. According to reports it was centered about 35 miles northwest here. No damage was apparent here.

About 300 soldiers work out of this abandoned and damaged golf course estate that the squadron uses as a forward operating base   Some of the troops sleep under the cover of awnings and in some of the larger rooms of the facility. Others bed down by the debris-filled swimming pool or spread out on the tennis courts.   Moments after the aftershock, you could hear the cries rising from the survivor camp adjacent to the base. Sirens followed shortly.

According to Eldridge, while today’s aftershock was definitely disconcerting for some, it remains business as usual for the squadron, as it passes out food and water for those left homeless by last week’s earthquake.   “It’s a concern. But there’s not a lot about that concern we can do. We have a plan in place to get everybody outside the buildings. The guys understand what they’re supposed to do when that happens,” Eldridge said.   “I don’t really think it effects our distribution efforts, he said. “Unfortunately it’s just something we’re going to have to deal with.”   Still, the early morning aftershock gave those soldiers working here just a little taste of why many in the camps are hesitant to return indoors.   “It was kind of like standing on a board on top of a ball,” said Army Staff Sgt. Steven Payne.
Related Sites:
Special Report: Haiti Earthquake Relief