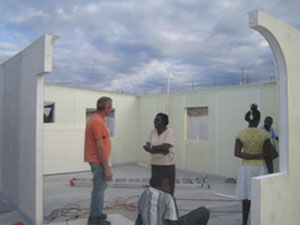 WASHINGTON (CNS) — Church reconstruction in Haiti is moving forward at a faster pace after months of discussions as Haitian and American church leaders gain confidence in the process they established to oversee the massive rebuilding effort.

Planning for two new projects in the earthquake-damaged capital of Port-au-Prince was approved in mid-March by the PROCHE Joint Steering Committee overseeing the reconstruction, and the first church to be rebuilt with some of the $33 million donated by American parishioners was consecrated in February.

But church leaders cautioned that the challenge of rebuilding churches, schools, convents and seminaries is so immense that it will take millions of dollars more in donations and years of planning before the dozens of structures destroyed in the powerful January 2010 earthquake will be replaced.

“The problem is bigger than we can solve,” said Archbishop Thomas G. Wenski of Miami, a member of the steering committee.

While 36 projects are under way and one has been completed, dozens more across the expansive earthquake zone remain to be tackled.

Funds for planning the rebuilding of St. Louis King of France Church and Christ the King Church were the most recent to be approved under PROCHE, the Partnership for Church Reconstruction in Haiti.

PROCHE is a joint effort among the U.S. Conference of Catholic Bishops, the Haitian Episcopal Conference, Adveniat, which is the German bishops’ agency for solidarity in Latin America, and the French bishops’ conference to coordinate the reconstruction effort.

It has taken PROCHE more than two years to gain its footing as the organization faced staffing challenges and the unwavering insistence from American partners that quality building codes be adopted for all construction projects.

“I think we’re (PROCHE members) becoming a little more at ease,” Archbishop Wenski told Catholic News Service April 1. “Since we began with PROCHE the expectations of many people were that we were going to get on the ground fast and start rebuilding … that we could begin construction sooner rather than later.

Father Juan Molina, director of the U.S. bishops’ Office for the Church in Latin America, said in the 29 months PROCHE has existed it has awarded more than $17 million for reconstruction, a little more than half of the money originally allotted for building projects

The $33 million came from a pot of $80 million American Catholics donated in the months following the disaster. The remaining $47 million went to Catholic Relief Services’ programs in Haiti.

“We’re at a very good point where we can see the efforts of the bishops of Haiti and the bishops of all the other episcopal conferences may be paying off,” Father Molina said.

The first church to be completed, St. Francis of Assisi in Grand Goave, about 35 miles west of the capital, was dedicated in February. Father Molina expects five other projects to be completed over the next several weeks.

About $8 million is expected to be awarded through the end of 2013, he said.

Reconstruction also has been boosted by the Koch Family Foundation of Gainesville, Fla., which has awarded funds for several projects.

“It is the first time in quite a few years we have collaborated with a Catholic foundation,” Father Molina said.

Some attention has been given recently to the rebuilding of the Cathedral of Our Lady of the Assumption in Port-au-Prince, which was destroyed in the earthquake as the century-old roof collapsed during the 35-second temblor.

An international competition resulted in several designs being submitted, bringing attention to the need for a new cathedral to the world, Archbishop Wenski told CNS.

Any plan for the cathedral is expected to cost $40 million to $50 million, and a separate fundraising campaign would be necessary, he explained.

“The cathedral is a national symbol,” the archbishop said. “To replace that cathedral, to do something like it was before, would be very expensive.”