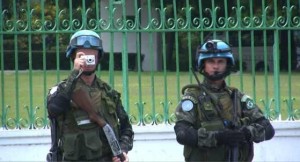 The 15-member Security Council has unanimously adopted a resolution to extend the controversial peacekeeping mission until Oct. 15, 2013, with a planned draw-down of troop strength from 7,340 to 6,270. According to UN Secretary-General Ban Ki-Moon, the key prerequisite for total withdrawal is having a 16,000 strong national police force in Haiti. The force was first authorized in 2004.

Inside the Security Council chamber during an open meeting, Haiti’s Ambassador to the United Nations Jean Wesley Cazeau said his government was pleased with the plan for “configuring” MINUSTAH.

U.S. ambassador Susan Rice told the council the U.S. government would remain a “steadfast friend” to the Caribbean nation. However, Ambassador Rice added: “The mission must remain effective in achieving its mandate and adhere to the highest standards.”

Meanwhile, across the street from UN headquarters at 42 St. and First Ave., activists from the Haitian American Justice Coalition argued the past eight years of MINUSTAH’s mandate represented a debilitating military occupation by the UN, U.S., France and Canada.

“The highest standard would be a complete withdrawal,” said Jean Robert Lafortune, an activist with the Justice Coalition.

When Haitian President Michel Martelly addressed a packed Brooklyn College auditorium on Sept. 27, member of the audience shouted: “What about MINUSTAH?”

“Haitians created MINUSTAH,” President Martelly said. “Before they came, there were frequent kidnappings. There was lots of insecurity. Yes, we created the conditions—I can’t say that I’m happy they’re here, but we need them until our national defense force is strong,” added President Martelly.

In the corridors of the UN, a Haitian delegate was overheard on the day of the Oct. 12 vote, responding to a reporter’s question concerning the Haitian protest outside: “How can we ask the UN to leave when we have a porous police force that is struggling?” the diplomat asked.

One of the organizations supporting the continuance of the Mission is the Washington, D.C.-based International Crisis Group. “Early departure of the UN Mission would leave a security vacuum ripe for exploitation by armed gangs,” ICG stated in a position paper published as an op-ed piece in U.S. newspapers.

An IGC spokesperson declined further comment when contacted by The Final Call.

The ICG has no legitimacy in this debate, said Haitian activist Ezili Danto, of the Conn.-based Haitian Lawyers Legal Network. “They say the UN is bringing stability. Where is this stability when the troops are sodomizing our young boys, opening brothels, and spreading cholera that has killed 7,000 Haitians, leaving another 600,000 sick?” Ms. Danto asked.

“So, where is the moral authority of the UN? They don’t have it in Haiti,” Ms. Danto told The Final Call.

Ironically, the action extending MINUSTAH’s mandate came two days before the second anniversary of the cholera epidemic, which has been linked to Nepalese peacekeepers, but the UN still refuses to acknowledge peacekeepers spread the waterborne and deadly disease. The U.S. Centers for Disease Control and the World Health Organization say cholera was spread by the peacekeepers, who dumped sewage into one of Haiti’s main rivers.

After years of allegations by Haitians that peacekeepers openly raped women and girls and demanded sex for food, two Pakistani soldiers were recently found guilty by a military tribunal in Haiti of the September 2011 rape of a 14-year-old boy.

Activists are waiting to see what the Uruguayan government intends to do with soldiers who allegedly raped an 18-year-old boy in April.

Haitians inside the country are protesting MINUSTAH and the main contention is the Security Council authorized the force as military intervention, when Haiti was not engaged in civil war, Mr. Lafortune said.

The former president of Haiti, Rene Preval, posed the same argument during his last address before the Security Council in April 2011. He chided the council for sending peacekeeping troops to a nation “that has no civil war.” “Tanks and armored vehicles manned with soldiers should have given way to bulldozers and engineers,” he said.

“What Haitians see is a military occupation with foreign soldiers riding in armored carriers pointing guns at them,” said Brian Concannon, Jr., executive director of the Boston-based Institute for Justice and Democracy in Haiti. Activists are right when they charge the presence of MINUSTAH is “to keep down grassroots advocacy,” Mr. Concannon added.

The Haitian American Justice Coalition conducted a survey of 800 households in Port-au-Prince, Haiti’s capital in January and released its findings in February. The survey noted that less than a quarter of respondents considered MINUSTAH “a good thing,” while 43 percent believed the peacekeeping force engaged in criminal activities such as theft and rape.

What use is MINUSTAH if all its members do is molest children,pay young girls for sex, smuggle cocaine and spend their time on Haiti’s beaches?

Time for MINUSTAH to go home.