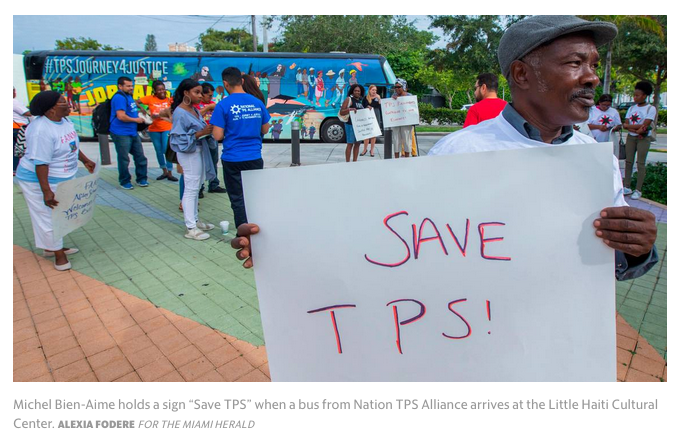 A federal trial in New York challenging the Trump administration’s decision to end Temporary Protected Status, or TPS, for thousands of Haitians, concluded Thursday with internal government emails showing that the administration was so determined to end the program that it ignored its own government’s research flagginghealth and safetyconcerns.

A decision in the case isn’t expected until after March 1, the deadline given by Eastern District of New York federal judge William Kuntz to lawyers to file post-trial submissions.

Sejal Zota, legal director of the National Immigration Project of the National Lawyers Guild, said while they tried to focus on telling a story during the trial that began on Monday, they will use the time given by Kuntz to submit additional evidence. During the trial, Zota’s team and other lawyers serving as co-counsel in the suit argued that the termination of TPS for Haiti was based on President Donald Trump’s “categorical and defamatory assertions about all Haitians, which the Haitian TPS recipients were given no opportunity to challenge.”

“I’m definitely feeling good that our plaintiffs were able to have their day in court and …tell the judge how they are going to be harmed if this TPS termination is upheld, and I think this was a very important opportunity for our plaintiffs to have,” Zota said. “I realize that the government officials were not there but this trial is still about holding them accountable.”

TPS was first given to Haiti by President Barack Obama after a catastrophic 7.0 magnitude earthquake rocked the country nine years ago Saturday on Jan. 12, 2010.

But as the Trump administration began rescinding the protection for Haiti and Central American nations, lawyers began filing suits. The New York lawsuit is the first of the five to go to trial. 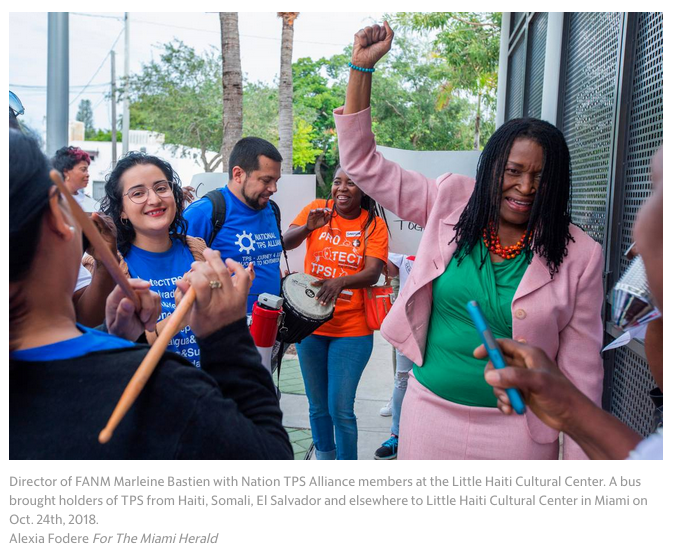 During the four days of testimony, U.S. Department of Justice lawyers did not call a single witness but instead relied on their cross-examination of the plaintiffs’ witnesses to argue their point that the U.S. Department of Homeland Security was within its discretion when it announced the end of TPS for Haiti in November 2017. The decision, they said, was based on lengthy consultations and DHS’ conclusion that Haiti no longer met “the condition for designation.”

The announcement of Haiti’s termination by then-DHS Acting Secretary Elaine Duke came 14 days after the protection for 2,500 Nicaraguans was terminatedafter nearly 20 years. Four months later, Haitians out of New York and Florida, including the Family Action Network Movement in Miami (FANM), filed the class-action lawsuit in the Eastern District of New York.

Like the other suits representing Haitians as well as Salvadorans, Hondurans and Sudanese TPS holders, the New York suit argues that Duke violated procedures and TPS holders’ due process. The decision, the suit alleges, was also rooted in the president’s “racially discriminatory attitude toward all brown and black people.”

During Thursday’s closing arguments, attorney Howard Roin, one of several lawyers representing the plaintiffs, cited emails and other internal government documents, including Duke’s handwritten November 2017 notes, to bolster plaintiffs’ argument: that the White House was not interested in the facts about conditions in Haiti as DHS officials mulled over whether to continue to shield up to 60,000 Haitians from deportations, and Duke was under repeated pressure to terminate the program.

Roin also cited documents that were introduced into the court recordbolstering advocates’ assertions that during the process, there was disagreement between Trump political appointees who wanted to terminate, and government career officers whose research showed that Haiti could not handle the return of thousands of nationals because the country remained a mess.

Attorney Paromita Shah said the Haiti TPS termination decision was “prearranged, premeditated from the beginning,” and based on “racial animus.”

“Having a trial on that issue is significant because we know those comments were made in relation to TPS for Haitians,” she said. “There is a long history of bias against Haitians in our immigration system. But it is clear that this administration has at least a public record in making disparaging comments.”

Shah added that the public — and Judge Kuntz — needed to hear “the evidence, the statement, the policies that were in place before termination happened…to get a grasp on how ugly and distorted this process was.”

Among the other evidence lawyers presented during the trial: internal emails from U.S. Citizenship and Immigration Services indicating that the agency made inquiries into whether Haitian TPS recipients received public benefits, committed crimes or provided remittances. Though none is relevant to a TPS termination decision, DHS, which acknowledged compiling the criminal histories, was doing so at the time officials were trying to decide how to proceed on the Haiti TPS designation.

Lawyers also introduced into evidence a cable from the U.S. embassy in Port-au-Prince that concluded Haiti was not ready to receive TPS holders. The cable is among several from senior U.S. diplomats to top State Department officials that were disregarded despite the warning that the mass deportations of Central Americans and Haitians could destabilize the region and trigger a new surge of illegal immigration. Despite the cables, the administration went ahead with its termination decisions, lawyers said.

In recommending that TPS end for Haiti, USCIS Director Francis Cissna concluded in a Nov. 3, 2017, memo that “Haiti has made significant progress in recovering from the 2010 earthquake, and no longer continues to meet the conditions for designation.”

“While lingering effects of the 2010 earthquake remain in housing, infrastructure, damage to the economy, health, sanitation services, security risks and emergency response capacity, Haiti has made significant progress in addressing issues specific to the earthquake,” Cissna argued. He also noted that 98 percent of the camps that sprang up after the quake had closed, and Haitian President Jovenel Moïse had announced that he would be rebuilding the quake-destroyed presidential palace.

Government lawyers noted these facts during their cross-examinations of witnesses. They also questioned the credentials of some of the Haiti witnesses, and played a video of one of the plaintiffs, Hait Liberté newspaper journalist Kenneth “Kim” Ives, refuting the quake’s death toll.

Ellie Happel, a lawyer and expert witness, testified that the only reason official numbers show a significant drop in the tent city population is because camps were forcefully shut down by the Haitian government. The director of the Haiti Project at NYU School of Law’s Global Justice Clinic, Happel noted that the Haitian government had not kept its promise to rebuild housing after the quake.

She also testified that while Cissna had described Haiti’s erratic GDP growth as “predominantly positive,” averaging 1.9 percent between 2010 and 2016, he had failed to consider that in 2017 GDP was on the decline while the country’s domestic currency was rapidly depreciating, said Beatrice Lindstrom, an attorney who attended all four days of the trial.

“The evidence leaves no doubt that Secretary Duke’s decision was made under pressure from a racist White House, and is irreconcilable with the facts and findings of the government’s own experts,” said Lindstrom, whose boss, Brian Concannon, was among those who testified for the plaintiffs. Concannon and Lindstrom are with the Boston-based Institute for Justice & Democracy in Haiti. 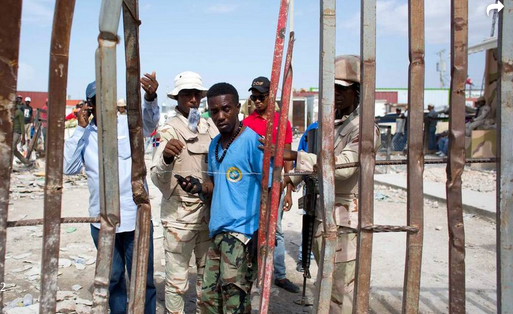 One of the longest testimonies came from Leon Rodriguez, the former director of U.S. Citizenship and Immigration Services in the Obama administration. During his more than four hours on the stand, Rodriguez testified that the Trump administration approach to TPS not only deviates from past practices, but is also illegal. Cissna, he said, had failed to consider the totality of Haiti’s circumstances, such as food insecurity and crime statistics, in determining if it could received its nationals back.

Ives, a top journalist at the newspaper, testified that one of his paper’s main reporters and fundraisers, Jackson Rateau, would have to return to Haiti should he lose his status and would not be able to effectively do his job. During the hearing, the government sought to use Ives’ own words to raise questions about the extent of the devastation, playing a video in which Ives accused nongovernmental organizations of profiting off Haiti and the Haitian government of inflating the quake death toll. The Haitian government, citing log books its drivers kept, revised its death figure to 316,000, sixth months after the disaster. Ives said the number was closer to between 60,000 and 80,000.

The earthquake death toll has always been in dispute. The Haitian government, citing logs it had drivers keep as they transported bodies to mass graves, reported the official number to be more than316,000while the U.S. Agency for International Development estimated it to be 46,000 to 85,000.

“Haiti still has not recovered from the earthquake, has been rocked by a cholera epidemic and is still reeling in the aftermath of Hurricane Matthew in 2016 and Hurricane Irma in 2017,” Ives said.

The plaintiffs are asking the judge to find that DHS did not do an adequate review and must conduct a new review on whether Haiti can absorb the return of its immigrants. With four other lawsuits also awaiting a day in court, legal experts say any decision Kuntz makes, while not compulsory, will be “persuasive precedent.”

“A decision on the merits especially after trial would have collateral consequences on all of our cases,” said Raymond Audain, an NAACP Legal Defense Fund attorney, who described Kuntz as a fair judge who made it clear earlier this year that he takes these issues very serious. “We are hoping for a favorable ruling.”

Audain said although the NAACP Legal Defense Fund was the first to sue the administration on behalf of Haitian TPS holders, a Maryland federal judge still has not ruled on the government’s motion to have the complaint dismissed.

In October, a federal judge in California granted a temporary injunction blocking the administration from deporting Haitian TPS holders and others as their termination deadlines approach. U.S. District Judge Edward Chen granted the temporary injunction as part of a California lawsuit filed by lawyers on behalf of TPS recipients from Haiti, Nicaragua, El Salvador and Sudan who have U.S.-born children. The decision is being appealed by the government and experts say Kuntz’s ruling should have no impact on the injunction..

In addition to the California and NAACP Legal Defense Fund suits, there are two others including one by the Lawyers’ Committee for Civil Rights and Economic Justice. It filed suit on behalf of Salvadorans, Hondurans and Haitians in Boston federal court. The committee previously challenged the constitutionality of President Donald Trump’s executive order targeting sanctuary cities.