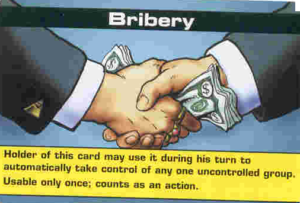 INVESTORS HAVE BEEN FEELING BETTER about IDT, the quirky company founded by telecom maverick Howard Jonas.

After disappointing many high hopes (“Finally Ready to Roll,” May 29, 2006) the shares (tickers: IDT and IDT-C) have tripled this year to a recent 15.81. The Newark, N.J.-based company may have staunched years of losses by downsizing and discontinuing some of Jonas’ varied ventures. It has about $10 a share in cash and a shale oil prospect in Israel.

But a nagging problem remains: the whistle-blowing suit of an ex-employee who claims he was fired for objecting to bribes that he alleges IDT arranged for Haiti’s former president, Jean-Bertrand Aristide. A trial is set for Nov. 9 at the U.S. District Court for New Jersey. The Justice Department and the SEC, meanwhile, are investigating whether the company violated the Foreign Corrupt Practices Act. They haven’t filed charges against the company. A money-laundering trial is scheduled for the end of November in Miami’s federal district court against the Haitian official who signed the IDT contract. He denies he laundered bribes from unnamed phone outfits. IDT denies all wrongdoing and says that investigations by expert outside counsel found no improper payments.

In a recent conversation with a reporter, CEO Jonas acknowledged for the first time that Aristide had met with an IDT official. “We thought that was highly unusual,” Jonas said. “In most cases, you’re just talking to the head of the telecom. It was unusual that the president himself would be involved with it.”

The whistle-blowing plaintiff, D. Michael Jewett, says he was fired in 2003 after voicing concerns over a deal in which he says Aristide was to skim IDT’s payments to Haiti’s government phone company via Mont Salem, a shell company run by a Turks and Caicos law firm. That firm has denied the shell company was a front for Aristide.

Jonas told Barron’s, “I have no reason to believe that they were not a legitimate agent.” IDT got a court order that barred Jewett from discovering Mont Salem’s ownership.

Jewett alleges that IDT’s head of international business, Jack Lerer, referred to Mont Salem as “Aristide’s bank account.” Lerer denies that and says he never offered to pay—or caused money to be paid to—Aristide or Haitian officials. The Haitian government filed a civil racketeering suit against Aristide in 2005, alleging that Mont Salem had been his front for receiving kickbacks from several North American telecoms, including three cents a minute from IDT. Haiti dropped the suit for lack of funds.

Jonas told Barron’s that payments to Mont Salem were legal because the law firm McDermott Will & Emery had given IDT a clearance letter after conducting its own due diligence on the matter. The letter isn’t in public court filings, but IDT says it will provide it to Barron’s.

In a deposition, McDermott partner David Levine recalled talking in October 2003 to an IDT lawyer who sought advice on a “hypothetical” deal she considered “fishy” and not “something that IDT ever does.” In a memo written right after his IDT consultation, Levine said he advised IDT to conduct “due diligence” on the payment arrangement. The very next day, IDT’s legal department approved the Haitian deal. McDermott said it doesn’t discuss client matters.

Jonas told Barron’s that the corruption accusations were made as a rationale for overthrowing Aristide. “They had to say: ‘He’s a crook. He took three cents from the telephone company,'” said Jonas. “That justified invading the country and overthrowing him.”