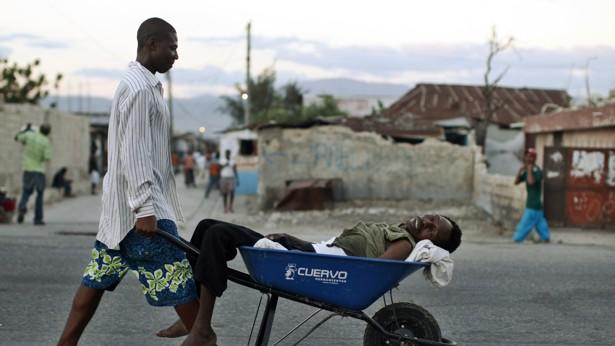 .
A Humanitarian Mission Becomes a Disaster

If anything could stand to rival the devastation of the natural disasters to strike Haiti, it would be disasters of the manmade variety.

Just over five years after a 7.0-magnitude earthquake killed well over 100,000 people in the country and destroyed countless government, religious, and cultural landmarks, Haiti’s recovery is not only far from over, it’s far from certain. An ongoing domestic political crisis is just one culprit.

Other sources of considerable trouble are the very humanitarian organizations that are supposed to help revive the country. Much of the food aid given by the United States in the wake of the 2010 earthquake—totaling well over $100 million—is believed to have actually harmed struggling Haitian farmers, who were already trying to sell corn and rice against cheaper imports.

Worse yet, the United Nations is almost certainly responsible for importing a cholera epidemic that infected roughly 700,000 Haitians, killing more than 8,000 people, just months after the earthquake. (Earlier this year, a U.S. judge declared the international organization “immune” from a lawsuit leveled against it by the country.)

This week has offered another cascade of dispiriting news. Tuesday brought allegations that that indicted soccer official Jack Warner had stolen $750,000 in earthquake relief money. On Wednesday, a Minnesota legislator called for a congressional hearing after an NPR/Pro Publica report asserted that the staggering $500 million raised by the Red Cross to build housing for 130,000 people had only yielded six houses following the earthquake. And a United Nations draft report obtained by the Associated Press shed light on the rampant problem of UN peacekeepers bartering relief goods for sex in Haiti.

In nearly 500 reported cases over five years in Haiti and a handful of countries, one-third of the claims involved children.More than 225 Haitian women told investigators of having had “transactional sex” for cash or goods. “For rural women, hunger, lack of shelter, baby care items, medication and household items were frequently cited as the ‘triggering need,’” the AP quoted the report as saying.

Of the nearly 500 claims of sexual abuse documented over five years in Haiti and Liberia, where the UN also has a peacekeeping mission, one-third involved children. In Haiti specifically, “[o]nly seven interviewees knew about the United Nations policy prohibiting sexual exploitation and abuse,” the AP quoted the report as saying. They did not know the mission had a hotline for reporting such abuse.

The draft report’s wording—“[t]ransactional sex is quite common but underreported in peacekeeping missions”—offers a pretty clinical way of saying that these problems are rampant. It’s still not clear exactly how many people might have been abused and not reported it. And we still don’t know exactly how much aid money has been squandered or lost to corruption. But how can a country rebuild while its benefactors keep damaging it?

1 thought on “A Humanitarian Mission Becomes a Disaster”