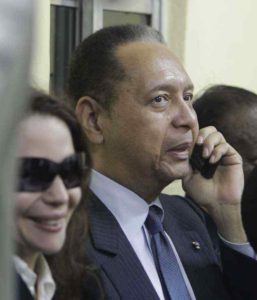 PORT-AU-PRINCE — In a move that stunned Haitians here and abroad, former dictator Jean-Claude “Baby Doc” Duvalier unexpectedly returned to his homeland Sunday after decades of exile in France.

Several thousand people gathered outside the international airport after the news began to spread through the capital.

“Here’s my president!” some in the crowd chanted.

Local journalists who talked with Duvalier inside the airport said he told them that he ‘‘came to help his country.” It was unclear how he intended to do so or what his immediate plans were.

Duvalier’s dramatic return could have unpredictable consequences for the country, Haitian experts said.

“At least in the short term, the Haitian political chessboard has changed and changed utterly,” said Robert Fatton, Jr., a government and foreign affairs professor at the University of Virginia. “We need more information from the French, the United States and the Haitian government before arriving at a sensible idea of this event.”

Prime Minister Jean-Max Bellerive said his government didn’t know that Duvalier was headed home until the former president was in the air.

“This time I’m totally lost. No way I’m going to believe the French didn’t know,” Bellerive told The Miami Herald. “We’re informed one hour before he landed with his passport ‘perime’ (expired) so this should at least have brought some attention!”

Police Chief Mario Andresol said there was no warrant for Duvalier’s arrest and he was free to return.

Few knew of his plans. Sources said he traveled on a diplomatic passport that he received in 2005.

For hours after landing, Duvalier was holed up in the diplomatic lounge at the airport as the crowd grew and authorities huddled over what to do. About two hours later, a frail-looking Duvaliar, surrounded by crush of supporters and security, left the airport in the back seat of an SUV. The crowd cheered.

In the chaos at the airport, national police used pepper spray and pointed their weapons at journalists to keep them away from the terminal. The United Nations, which has a peacekeeping force in Haiti, sent tanks to help keep order.

The foreign diplomatic community, which was also caught by surprise, had no immediate response. The U.S. ambassador and other diplomats were attending a meeting in preparation for Monday’s visit of Jose Miguel Insulza, the secretary general of the Organization of American States. The OAS has been working with the government to end a crisis stemming from last year’s presidential and legislative elections.

The OAS report on the election suggests that the government candidate should be knocked out of the runoff. The U.S. and other major donors have said that they back the report. President René Préval has not spoken publicly on the report but aides have said that he questions some of the findings.

Duvalier, who was handed the presidency at 19 by his father, Francois “Papa Doc” Duvalier, ruled Haiti from 1971 to 1986. In a U.S.-brokered deal, he fled the country for France amid massive unrest after anti-government demonstrators clashed with security forces and his private militia, the dreaded Tonton Macouts.

For months, graffiti on walls have read, “Welcome home Jean-Claude Duvalier,” indicating that his return may have been in the works for some time. He has said for years that he would like to return to Haiti.

Gesnol Pierre-Louis, who was 2 years old when Duvalier left, said he’s always been a fan of the former president.

“My parents always said when he was here, life wasn’t expensive, Haitians were not dying of hunger,” said Pierre-Louis, 25. “He was not a bad person.”

But others remain confused about what the return means and its political impact.

“I’m asking myself if it’s Préval, the French and the Americans. What’s more important for me is if Préval has something to do with it. It would be very frightful if he’s had something to do with it,” Charles said. “It would mean he’s doing his best to see if he can stay by defying the international community so he could not go into exile.”

Charles, who was among the anti-Aristide opposition that led to his eventual ouster, said he’s as surprised as everyone that Duvalier was back.

“Right now I really don’t know what’s going on. The one thing I know is the French knew about it,” he said. “I’m at a loss and don’t know what to think.”

At Karibe hotel, Duvalier was greeted by Martelly supporters. The crowd screamed and nearly tore down the gate trying to get to him. He later waved from the hotel’s third floor to throngs of fans and journalists waiting to snap his photograph.

Duvalier, who appeared to have a stiff neck, later enjoyed a late night meal of grilled conch with a side of lima beans. The table was set for 15, but only about 10 people joined him. He took calls and greeted old friends between bites. The dinner crowd gawked.

Haitians say that Duvalier’s return could lead to the return of other exile presidents, especially Jean-Bertrand Aristide, who was forced out in 2004 and now lives in South Africa. Some of Aristide’s supporters have already started calling for his return, many chanting his name at the airport as Duvalier sped away.

It is time to move on and recognize the earlier media comments about the Duvalier government, for what they were. Contrary to the media inspired image, Jean Claude Duvalier was always popular with the masses of Haiti, and remained so, over the years. He came into conflict with the business community and they staged what I call the YELLOW PAGES COUP. A general closure of businesses, along with the pressures from Washington, saw Duvalier fly into exile, rather than spill the blood of his people.

A few people sat down and called all of the businesses telling the owners they would be burned out, if they did not close their doors.

I have often said that Duvalier should have spilled a little and save a lot.

Had he been brave enough to hold totally free-and-fair elections in 1985 he would have won by a landslide and would still be president.

Ernest Preeg, American ambassador to Haiti in thee early eighties, once wrote, in his monograph on the Caribbean Basin Initiative…”It can honestly be said that the Jean Claude Duvalier presidency is the longest period of violence free stability in the nation’s history.”

He also noted the favorable school system, child mortality rates, and investment. Preeg said the CBI was more successful in Haiti, than elsewhere in the area, because of the infrastructure Duvalier had built up.

Unfortunately, Washington was in an ant-Duvalier…and by association…anti-Haitian mode and removed Jean Claude to replace him with a series of disastrous governments that followed….and exist to this moment.

Preval’s disaster is the latest example and now the OAS, UN and Americans are considering another mortal thrust at Haiti by considering application of the OAS analysis of the criminally flawed November 28, 2010 elections.

Let’s give the Haitian people a new start.

A new CEP is appointed.

Well managed and supervised elections held and the person the Haitians want accepted as president.