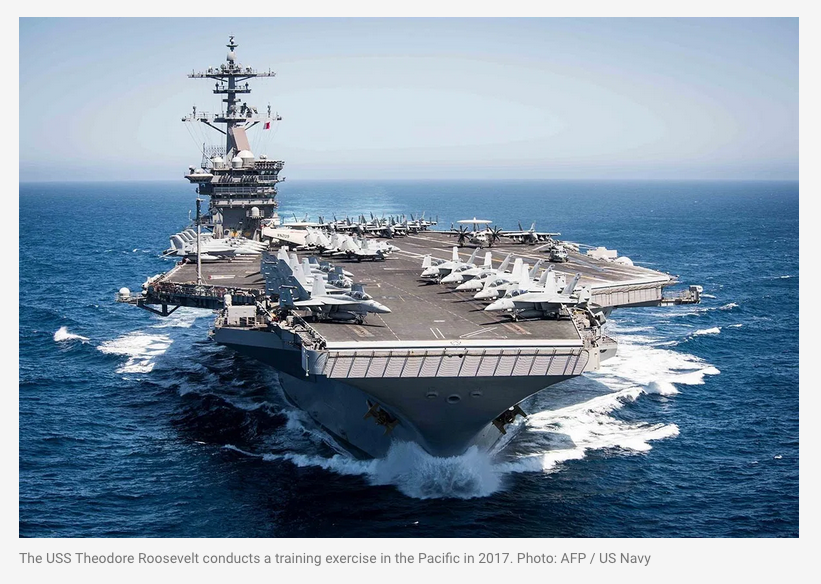 US Navy knew of the risk posed by Covid-19 on board ships but still sent the Theodore Roosevelt to Da Nang
by Stephen Bryen April 5, 2020

The aircraft carrier USS Theodore Roosevelt, accompanied by the guided-missile cruiser USS Bunker Hill, arrived in Da Nang, Vietnam on March 4 for a five-day visit. Captain Bret Crozier was relieved of command after writing a “request for assistance” letter regarding Covid-19 cases aboard ship on March 30. The real story behind the dismissal of Captain Crozier is that the ship should never have been sent to Vietnam and its crew should never have mixed with the local Vietnamese population.

The Navy was well aware it was putting carrier personnel at extreme risk and made faulty preparations in case of infection. A close reading of Captain Crozier’s March 30 letter makes it clear that the Navy did not equip the carrier with either proper testing capabilities or instructions on what to do if anyone got sick. The actual number of infected personnel on the Theodore Roosevelt is not known, but it is thought to be more than 100.

According to a March 12 press release from the US Indo-Pacific Command, “sailors from both ships participated in cultural exchanges and community service projects, including making crafts, playing sports, a language exchange, gardening, and painting” at a variety of locations.

Ironically, there was also a professional exchange on infectious disease prevention during the visit.

By the time of the Theodore Roosevelt’s port call, the US Navy – and the whole world – was aware of how the virus could wreak havoc on a crowded ship.

On January 20, 2020, the cruise ship Diamond Princess sailed from Yokohama, Japan with 2,666 passengers and 1,045 crew on a 14-day voyage. Then the virus struck. The cruise ship company announced that a passenger from Hong Kong tested positive for Covid-19 on February 1, six days after leaving the ship.

The infection rapidly spread through passengers and crew. On February 16, the US State Department chartered aircraft to bring American citizens back to the US. In the next few days, Canada, Australia and Hong Kong also arranged for aircraft to bring their citizens home.

Out of the 3,711 passengers and crew onboard the Diamond Princess, 712 were infected and 12 died.

The plight of the Diamond Princess was widely known before the Theodore Roosevelt was sent to Vietnam so the State Department was intimately aware of the risk. On January 31, at the direction of President Trump, the US announced travel restrictions on China and declared the Covid-19 epidemic a public health emergency.

Only one conclusion can be drawn: the State Department, which has to approve port visits by US warships, and the Pentagon, knew they were exposing the Theodore Roosevelt to danger.

By February 14, well before the carrier arrived in Vietnam, the Navy ordered all ships in the Indo-Pacific region that had made port calls to quarantine at sea for at least 14 days, the maximum incubation period for the novel coronavirus. Stars and Stripes reported that the Navy also directed the 7th Fleet headquarters in Yokosuka, Japan to screen everyone accessing the fleet’s warships and aircraft.

In general, Vietnam strives to balance relations with the US and China, with China always seeking to get the upper hand. But there was no urgent strategic reason to send the Theodore Roosevelt to Da Nang in early March.

China has long been ultra-sensitive about US aircraft carriers. In 1996 during the Taiwan missile crisis and visible Chinese preparation for an invasion of Taiwan, the US sent two aircraft carrier task forces toward the Taiwan straits. China backed off, fearing that any conflict with the US would lead to a war that China was not prepared to fight.

China still does not want to get into a fight with the United States. But, with two American aircraft carriers and their task forces operating in the Pacific, China is always tracking the ships and looking for ways to disrupt their operations and influence. A carrier infected with Covid-19 is not fully operational. China is undoubtedly aware of Roosevelt’s status after the Da Nang visit.

The Navy has never officially admitted that the virus on the Theodore Roosevelt was caused by the ship’s visit to Da Nang. But the bigger question is why the Navy and State Department permitted the visit in the first place, exposing US sailors to needless risk, and seriously limiting the US presence in the Pacific.

I believe that Captain Crozier tried the chain-of-comment trick before writing his 4 page letter.

The same idiots who insisted on the visit – after senior Naval personnel raised questions about the dangers – probably slow-tracked the warnings. Thomas B. Modly, the acting secretary of the Navy, who fired Crozier, was probably the key person pressing for the March 10 visit to Viet Nam.

Modly should be fired.