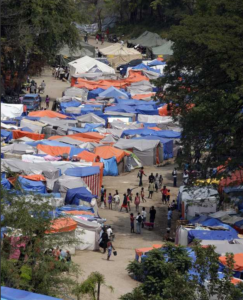 PORT-AU-PRINCE, Haiti — U.N. Secretary-General Ban Ki-moon is in Haiti to investigate a shortage of shelter and increased violence in Haiti’s teeming earthquake camps.

Ban’s four-hour visit Sunday is his second since the Jan. 12 earthquake ravaged the Caribbean nation, killing more than 200,000 people and leaving 1.3 million homeless.

His first stop is a sprawling tent city behind a country club that became a U.S. Army base after the disaster.

Tens of thousands of people there are at risk for floods and landslides as the rainy season approaches.

Only half Haiti’s post-quake homeless have received a tent or plastic sheets for protection from deluges.

The U.N. leader is scheduled to meet with President Rene Preval.

The headline makes it sound as though he had visited the front lines in Iraq  as mortar shells reigned down  with machines guns sweeping his choppers landing zone!!

Exactly what dangers did he see up close, other than disease, infection and hunger??

Let’s be serious, a  4 hour visit doesn’t give time for anything, even with a helicopter ride to and from the airport.   His time on the ground spent surrounded by UN brownnosers, trying to be included in the photographs, and security people. Hardly the way to get a real feel of things.

Secretary Ban must get higher per diem if he visits places for a few moments.

The concept of a four hour visit is an insult to Haiti and its people.

Next time, ask for a videotape and I will send it to him at his headquarters in New York.