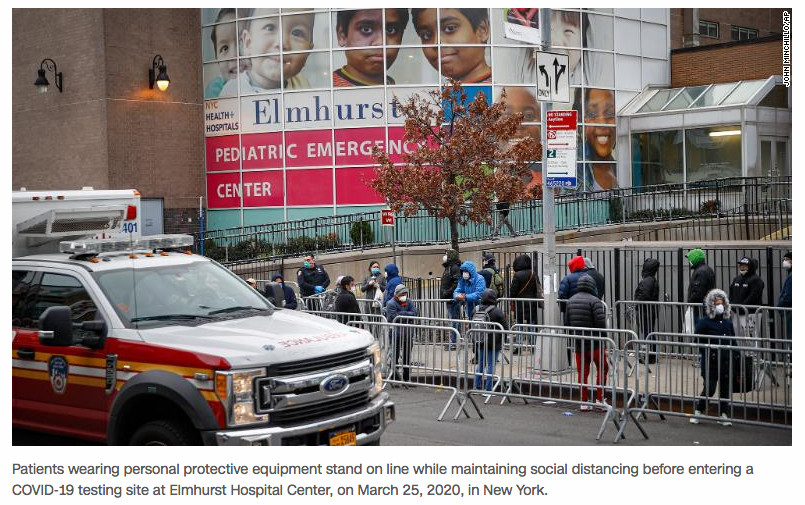 (CNN)There were the dire predictions from his health team. There were the late-night pleas from his staunchest allies. There was the line ticking upward, never seeming to curve, let alone flatten.

But as President Donald Trump was weighing last week whether to quickly return the country to normal after 15 days of virtual shutdown, it was the images from his own borough in New York City that seemed to drive home the still-worsening severity of the coronavirus pandemic.
Elmhurst Hospital in Queens has become an apocalyptic illustration of a nation in crisis, its doctors and nurses struggling to keep up with a surge of infections. A refrigerated truck, acting as a makeshift mortuary, idles outside.
mages from the besieged hospital, only seven miles from where Trump was raised in Jamaica Estates, had a sobering effect on the President this week as he was mulling options for returning Americans to work, people familiar with the matter said. 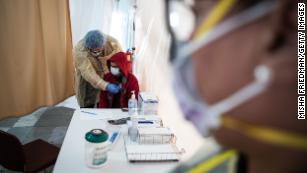 What it’s like for health care workers on the front lines of the coronavirus pandemic
Even as members of Trump’s task force offered models showing potentially millions of Americans becoming infected if the country was allowed to return to normal, it was the sight of Elmhurst — with triage tents erected outside and deaths mounting inside — that seemed to penetrate, according to officials who discussed the matter with him.
“This is in my community in Queens, New York. I have seen things that I’ve never seen before,” Trump said Sunday. “I mean I’ve seen them, but I’ve seen them on television and faraway lands, never in my country.” 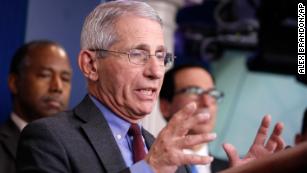 US could see millions of coronavirus cases and 100,000 or more deaths, Fauci says
And so, after a week of publicly declaring that life in America must soon return to normal, Trump abruptly reversed course Sunday. The President announced during a news conference in the Rose Garden — the same venue where, five days earlier, he set Easter as a target date for reopening — that nationwide social distancing guidelines he enacted would extend another 30 days.
“The better you do, the faster this whole nightmare will end,” the President said, adding that he would be finalizing a new plan and strategy early this week, and announcing the details on Tuesday.
The retreat was the result, multiple advisers and officials said, of overly ambitious goals and competing viewpoints colliding with the stark reality that coronavirus is nowhere near contained in the United States — as evidenced by the pandemonium underway in Trump’s hometown. 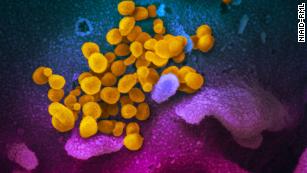 How to feed the hungry, protect health professionals, aid refugees and support service workers during the pandemic
Trump began the week declaring the “cure” he imposed on the nation — social distancing and self-isolation — was worse than the disease itself because it was costing millions of jobs and putting small businesses on the brink. He watched in horror as the stock market, his personal barometer for success, plummeted in its worst days of losses since Black Monday in 1987. Business leaders phoned him — or, in some cases, worked through intermediaries like Treasury Secretary Steven Mnuchin — to convey their panic at the nationwide recommendation to stay at home. He held a call with investors fearful about Wall Street. And in a series of conversations, Trump fielded complaints from outside friends who said the restrictions were too much — a point he said he emphatically agreed with. 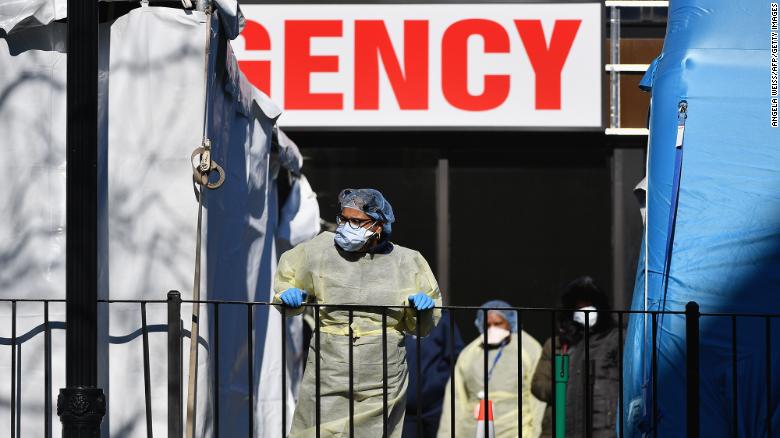 Medical workers outside at Elmhurst Hospital Center in the Queens borough of New York City on March 26, 2020.
In a persistently riven West Wing, the debate over when and how to return the country to normal life took on outsized weight as aides and the President himself recognized the decision could amount to the most consequential of his presidency. 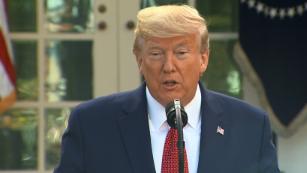 Trump concedes US coronavirus death toll could be 100,000 or more
If he chose wrong, some advisers warned, potentially millions of lives could be at risk. Alternatively, some on his team argued, the economic well-being of the nation was eroding quickly and possibly irreversibly.
In frequently intense Situation Room discussions over the past week, Trump’s health advisers warned a wholesale return to normal life would essentially mean a guaranteed recession and an untold cost in human life. He received near-daily entreaties by members of his health team, led by Dr. Anthony Fauci, to keep Americans at home, according to people familiar with the matter.
On Sunday, Fauci said his dire predictions about possible case counts — including, in one scenario, of more than 100,000 Americans dead — had an impact on Trump.
“The idea that we may have these many cases played a role in our decision in trying to make sure that we don’t do something prematurely and pull back when we should be pushing,” he said, adding later that he and Dr. Deborah Birx, the White House coronavirus response coordinator, “spent a considerable amount of time going over all the data, why we felt this was a best choice for us, and the President accepted it.”
Fauci and Birx had a Sunday morning briefing where they presented the President with a model that projected 100,000 to 200,000 people could die in the US, information that seemed to startle the President. Given the data, Trump felt he didn’t have an option but to agree to more time, multiple sources told CNN.
Trump agreed with the recommendations put forward by Doctors Birx and Fauci “without much pushback at all,” a source told CNN. “He was interested in them and accepted them.”
Fauci told CNN’s John Berman on “New Day” Monday that when he and Brix presented the data to Trump, “he got it right away.”
“He looked at them, he understood them and he just shook his head and said, ‘I guess we got to do it,'” Fauci said.
But some White House skeptics were concerned the experts like Birx could be putting faith in models that may not prove accurate in the end given the unknowns. 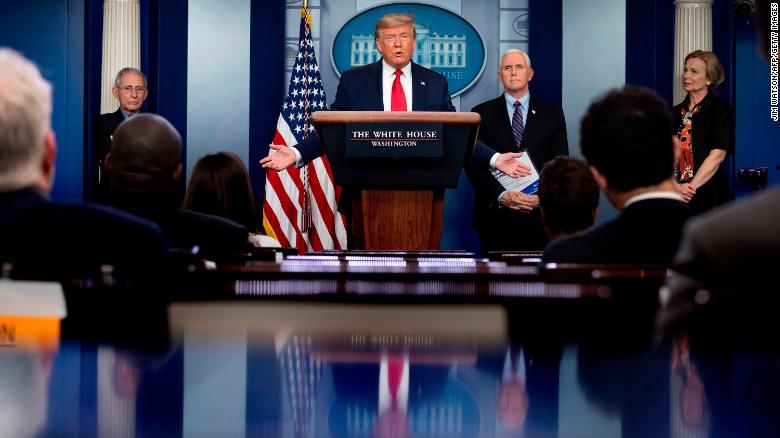 US President Donald Trump, flanked by (From L) Director of the National Institute of Allergy and Infectious Diseases Anthony Fauci, US Vice President Mike Pence and Response coordinator for White House Coronavirus Task Force Deborah Birx, speaks during the daily briefing on the novel coronavirus, COVID-19, in the Brady Briefing Room at the White House on March 26, 2020, in Washington, DC.
The health professionals on Trump’s task force were aided in their efforts by some of Trump’s closest allies, including Sen. Lindsay Graham, who lobbied Trump in multiple conversations over the past week that lifting the restrictions too soon would ultimately prove fatal.
Trump did not initially appear convinced. Even after a meeting early in the week where the task force’s doctors offered their worst-case predictions of allowing Americans to return to normal, Trump told the team that Americans needed to look forward with certainty to a time when they would not be restricted to their homes and could return to their workplaces or places of worship.
During meetings of the task force at the end of last week and into the weekend, Trump remained intent that the country go back to work soon. But the situation in New York — paired with worsening outbreaks in Florida and Louisiana and warnings from his health officials that localized restrictions could backfire — ultimately led Trump to choose a broad extension of the guidelines over other options that would have allowed some Americans to return to work sooner. 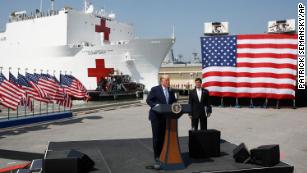 Trump wobbles as a wartime President
Some of those options included a tiered system where some younger Americans were recommended to return to work sooner or areas with lower case counts were given different guidelines than places with more serious outbreaks.
Trump even previewed such a geographic system in a letter to governors Thursday, writing that counties would be ranked “high-risk, medium-risk or low risk” and given more tailored recommendations to their specific situation.
Some governors — including Mississippi Republican Tate Reeves — encouraged the President to offer more specific guidance to individual states where the outbreak hasn’t yet taken hold. But other governors were wary and said they would not lift their own orders to self-isolate even if Trump recommended otherwise.
Ultimately, White House officials also recognized governors would play a greater role in the return to normal life than Trump might because of the decisions they each make for their own state about when restaurants, schools and other venues can reopen.
This became increasingly clear to the President after he floated a quarantine for three states — New York, New Jersey and Connecticut — that was quickly shot down by officials in those states. And the President had also been counseled that his attacking governors who had criticized the federal government, which he had done on multiple occasions, could have a political cost.
Without a guarantee that states would even heed Trump’s advice, some aides saw little upside to loosening the restrictions when — at best — they could cause confusion between federal and state guidelines and — at worst — lead to heightened spread of the disease.
Officials said Trump’s fears of a national economic meltdown also abated slightly with the passage of a massive $2 trillion stimulus package at the end of last week, and that he appeared more receptive to suggestions that he extend the distancing guidelines that health experts say are necessary to prevent further contagion. 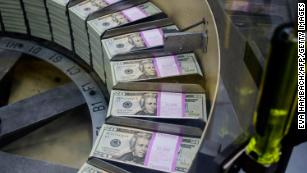 When will you see money and benefits from the stimulus bill?
As officials worked this week to determine a path forward after the 15 days expired on Trump’s initial distancing recommendations, some conservative economists working informally with the White House suggested Trump identify a date and aim policies toward reopening most of the country by then.
Easter, on April 12, seemed a reasonable goal, at least to the economists.
But after Trump threw out the Easter date — which aides felt appealed both to the business community and to evangelical Christians — during a Tuesday appearance on Fox News, health experts raised urgent concern that the deadline was unrealistic given persistent problems in testing Americans. Top members of his task force had not been forewarned about the President’s announcement.
And on Sunday, Trump seemed to recognize that the pews would not, in the end, be full in two weeks.
“It was just an aspiration,” Trump said of his Easter date.

CNN’s Dana Bash and Jim Acosta contributed to this report.