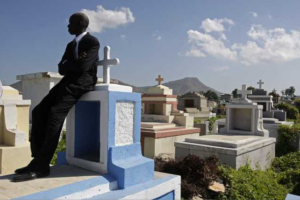 Despite billions of US dollars in pledges and an unprecedented humanitarian drive, it is likely too late to avert a second disaster in quake-hit Haiti, a top US aid co-ordinator has warned.

Tents and tarpaulins are simply not enough to protect tens of thousands of Haitians from the coming rains and hurricanes, and a new wave of quake survivors could perish in a second “catastrophe”, InterAction chief Sam Worthington predicted.

“Having observed camps on very steep slopes and that you cannot simply relocate hundreds of thousands of people easily, we anticipate that the rainy season will lead, to a certain degree, to another catastrophe that despite the hard work of the international community will be hard to avoid,” he told AFP.

“Deaths, landslides and so forth,” he explained, adding: “What we can do is work with the UN to create shelters that people can find refuge in, but there simply isn’t the time.”

In Haiti for a week for meetings with top government officials, including President Rene Preval, Worthington is co-ordinating the massive US NGO effort but is realistic about what can be achieved.

“We’re in a race against time and even though a large number of people will be moved, I do anticipate that, sadly, many will be affected by the fact that they are living in areas that are dangerous.

“One could get a tent, one could get plastic sheeting but to get people in temporary shelter in such a way that it will withstand a hurricane or rains and ultimately rebuild, we are talking about an effort that will take years.”

Teams from the International Organisation for Migration are laboriously trawling hundreds of camps to register the particulars of each family, while other UN agencies draw up emergency plans for flood and hurricane prevention.

Some 218,000 Haitians are deemed to be in “red camps”, those considered at gravest flood risk, and the race is on to find them alternative shelter before the rain and possibly calamitous landslides.

There have already been a few nights of torrential downpours in the past week and sustained rains could spell disaster in Port-au-Prince where countless people subsist in wretched conditions perched on treacherous slopes.

“Our community is talking about a second disaster happening when the rains hit,” said Worthington. “I am not sure to what extent that can be avoided.”

“Unfortunately, many of the camps are in areas that have no drainage whatsoever and many of the shelters are on slopes that are 20 degrees or steeper,” he told AFP after a briefing at the UN logistics base.

The 7.0-magnitude earthquake that struck Haiti as dusk fell on January 12 was one of the worst natural disasters of modern times, if not the worst. It left at least 220,000 people dead and affected three million Haitians.

1 thought on “Too late to avert second Haiti disaster”