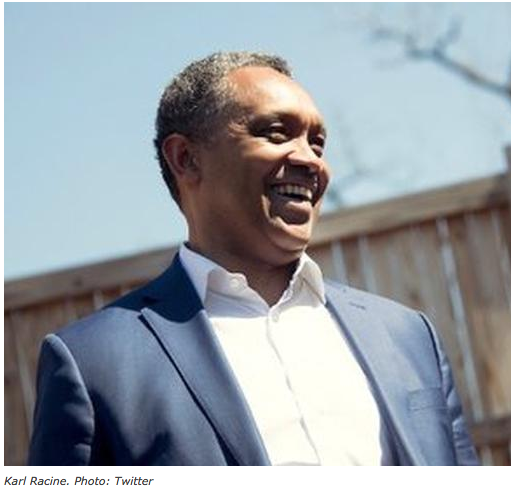 WASHINGTON, USA — Who would have thought that a top level immigrant from one of President Donald Trump’s “shithole” countries, would be placed so high up the food chain in the US legal system with enough power, office and clout to curb some of Trump’s wildest and most fanciful orders? Who is that person you ask? His name is Karl Racine, the Haitian-American attorney general for the District of Columbia.

Racine is a Haitian-born American citizen who emigrated from Haiti when he was about three years old. He attended the Ivy League University of Pennsylvania for his undergraduate degree before going to the University of Virginia to take up law, and also was on their basketball team where he excelled and helped U-Penn win the Ivy League title twice.

Racine played against Michelle Obama’s brother, Craig Robinson, in a tight game where he was fouled by Robinson and then sunk the final two free throws to help UPenn beat Princeton. Racine likes the game of basketball so much that he still plays and has regular games against former US attorney general, Eric Holder. One can only imagine that former President Obama had to have had a few pickup games with Racine as well.

With a unique and diverse background Racine heads one of the most important legal departments in the US; and with Washington DC being more of a municipality than a US state, which means they have no governor along with having nonvoting members of the US congress and only a mayors, Racine is as high up in the DC political landscape as it comes.

Racine has placed himself strategically at the heart of some of the most daring public defiance positions against the Trump administration, which ironically has put him in a position of epitomizing the American dream in an immigrant mould that Trump has roundly criticized as unworthy of being American.

Racine, along with the attorney general of Maryland, has sued Trump for breaches of the Emoluments Clause of the US Constitution: Article I, section 9, paragraph 8, which states: “No title of nobility shall be granted by the US: And no person holding any office of profit or trust under them, shall, without the consent of the Congress, accept of any present, emolument, office or title, of any kind whatever, from any King, Prince or foreign State.”

At a news conference held at Racine’s office in DC back in July 2017, Racine laid his case for this lawsuit, which stated in short that Trump was using his office to enrich himself and said that: “My office window is just a few floors above where we are sitting and see the tower of the Trump International Hotel, we know exactly what’s going on every single day. We know that foreign governments are spending money there in order to curry favour with the president of the United States.”

Racine further went on to state in his indictment of Trump’s personal business entanglements with foreign interests and governments and named Saudi Arabia as one prime example of spending hundreds of thousands of dollars at one of Trump’s properties when Saudi Arabia has important business deals and policy matters before the government of the US.

Evidence of Trump’s emotional and moral conflict was evident when it was demonstrated that the Saudi government was behind the disappearance and assassination of international journalist and Saudi dissident, Jamal Khashoggi, at the Saudi Arabian Embassy in Turkey last year.

Trump could not come to grips with criticizing or even acknowledging the involvement of the Saudi government in the murder of Khashoggi, even though Saudi officials including the attorney general confirmed Central Intelligence Agency reports and Turkish intelligence investigations.

Racine also rejects Trump’s insistence of a border wall and his attempt to declare a national emergency in order to get the funding he needs for the border wall squeezed and coerced out of Congress.

Racine is not afraid to show his political leanings and in 2015 joined the the national Democratic Attorney’s General Association to help with the unsuccessful 2016 presidential campaign for Hillary Clinton.

Where the wind in Racine’s sails will take his career in his fight against Trump remains unknown, but one thing is certain the irony of his position being as an immigrant from one of Trump’s “shitholes” in the world, gives him a very special insight into the heart of American values and makes it more than personal for him.