The following is adapted from a presentation by Jessica Hsu of Other Worlds and Jean Claudy Aristil of Radio VKM Les Cayes at the Executive Symposium for Innovators in Coastal Tourism conference in St. Georges, Grenada held from July 8 – July 11, 2014.

A large-scale tourism project planned for the Haitian island of Île-à-Vache targets “the well-heeled tourist from traditional markets…creating a place of exquisite peace and well-being,” as described in the government of Haiti’s executive plan. The project aims to attract four character types: “the Explorers, the Lovers, the Rejuvenators and the Homecomers.” The corporations behind the project intend to build 1,500 hotels and bungalows along the island’s beaches, an international airport, a golf course, island farms, and tourist “villages” with cafes, shops, and night clubs.

The government touts the project as “community hand-in-hand”, with “equitable distribution of benefits for all.” It says the tourism will be “mothering [to] nature” and is for the “general good.”

The community sees it very differently. A grassroots group, Collective for Île-à-Vache (KOPI), was formed in December 2013 and immediately began organizing multiple peaceful protests, strengthening the voices of the local community, and connecting with allies.

Community members have been mobilizing because they understand the multiple challenges ahead if the project continues as planned. Problems will likely include displacement of people from their land, forced migration to the overcrowded capital in search of work, loss of food production in a hungry nation, further economic impoverishment, and environmental and cultural degradation.

The administration has been making empty promises and telling lies to the inhabitants of the island, while systematically violating their rights and using violence to repress and intimidate those who have been peacefully protesting. 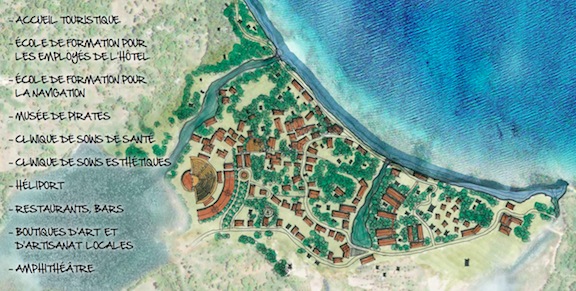 Special police forces, such as the Motorized Intervention Brigade (BIM) and the Intervention and Order Maintenance Corps (CIMO), have a permanent presence on the island now. Preceding the inception of the tourism project, there were only three police officers. In the last two weeks, a SWAT team has been introduced to the island. [The team was described in one account as more than 50 special police forces dressed in black with masks.]

Vice-president of KOPI, Police officer Jean Mathelnus Lamy, was arrested on February 21st. He was moved to the National Penitentiary in Port-au-Prince on Februray 25, where he remains without official charges.

The “peace and well-being” envisioned for the tourists have not extended to the local population. On the contrary, there is a sense of fear around what is impending. It began when the government issued an official decree on May 10, 2013 making all of the offshore islands zones of tourism development and public utility. The proposed plans for the project were created by three Canadian companies: Resonance, 360 VOX, and IBI/DAA. They have little understanding or attachment to community needs.

Since then, the situation has gotten much worse. In August 2013, groundbreaking for the international airport flattened an old-growth forest, which was considered community land. Truxton began dredging a pristine bay known as Madam Bernard without an assessment of the environmental impact on marine ecosystems. Abaka Bay, which is one of the two luxury hotels on the island, illuminated the issue of waste management when a recent human rights delegation spotted the resort’s current method of waste disposal behind the resort. The expansion of Abaka Bay is part of phase I of the project.

Construction on a new road began in late 2013, without any notice, damaging a number of homes and taking out up to 18 coconut trees, which were a critical part of one household’s livelihood. No compensation was offered for the losses, though that is required by the Haitian Constitution. The company working on the road and airport is the Dominican Company Ingeneria Estrella. [The delegation] spoke to one elderly woman whose home is near the airport and has been marked for demolition, as she understands, by the Office of Land Registry (DGI). She stated about the Estrella workers, “They come in and out of my yard without notice and they enter without even a greeting.”

The collective KOPI has been organizing with other grassroots and human right organizations from Port-au-Prince. The group’s demands are (1) transparency and communication about the project, (2) retraction of the May 10, 2013 decree stating that the island is for tourism development and public utility, and (3) release of KOPI’s vice-president, Jean Mathelnus Lamy, who remains in the National Penitentiary, and (4) removal of the special police forces from the island. KOPI consists of 11 steering members and seven additional members in each of the 26 localities on the island.

Largely, the island community is not opposed to tourism. They are in favor of development which is respectful of their needs, which does not exploit nor threaten to take away their land; a project in which their participation is central and integral. However, they strongly oppose the current iteration of the project which is systematically violating their rights.

Last week, Prime Minister Lamothe visited the island again with a government delegation consisting of the Minister of Justice and a delegate from the Ministry of the Promotion of the Peasantry. Multiple communications were issued during this visit from the Ministry of Communication and Martelly-friendly outlets, including Haiti Libre, show what appears to be the prime minister talking to a supportive population about social programs and distributing food.

The untold story in these communications by Prime Minister Lamothe and Minister of Tourism Stephanie Balmir Villedrouin is that the population was told each household would receive 10,000 gourdes, or about US$220, during the visit to help boost microenterprise. When the delegation arrived, no money was distributed, but rather sacks of rice and crackers. Close inspection of the picture of Lamothe speaking, which was circulated by Haiti Libre and the Minister of Communications, shows the audience actually standing in a line for this hand out.

While the population protested the visit with burning tires and blockades, there were few people taking to the streets because of SWAT presence which accompanied the delegation. Warrants were issued for the arrest of KOPI leaders. Many of them have left their homes and gone into hiding unable to continue with their daily livelihood activities.

Villedrouin continues to say publicly the tourism development project is for the community, while the lies, intimidation, and repression continue. The population’s claims were verified in a report issued on April 2, 2014 [by eight Haitian human rights groups which visited the area] to investigate the tensions.

Similar recent foreign investment schemes in Haiti, like new free trade zones, have not brought the much- touted government line of better incomes. Residents of Île-à-Vache are concerned that they will have no power to enforce even the daily minimum wage of $5.11, as has happened with new sweatshops. Further, Haiti’s tourism industry – when it was flourishing in the 80’s – created a collision of wealth and extreme poverty which promoted other informal economies, such as the sex industry which was illuminated in the film Heading South.

Under the platform “Haiti is Open for Business”, the Martelly/Lamothe Administration continues to entice foreign investments with images of stability and security, building of infrastructure financed by PetroCaribe, and incentive policies such as a 15-year exemption from local taxes and duties exonerations on the import of equipment, goods and materials.

Tourism is one of the development pillars of the government in reconstruction/rebuilding following the 2010 earthquake. Tourism is supported by the Bill Clinton, UN Special Envoy to Haiti, who speaks of “Building Back Better.” The other economic pillars include mining, free-trade zones, and monocropping for export, all of which are direct affronts to the livelihoods of the rural peasantry and to food and land sovereignty.

The situation on Île-à-Vache is indicative of all the woes of Caribbean tourism and the model for what is to occur across Haiti. The government continues on its path to implement development to shape what it is calling “an emerging country by 2030.” In reality, these modes of development are further displacing and increasing urban migration; detaching and alienating the peasantry from the land with few alternatives.

Villedrouin does not speak about displacements, but rather “relocation,” when addressing residents of the island, while reporting to Reuters that only five percent of the population will be displaced. Lamothe promises there will be no displacements.

Simultaneously, there are still displacement camps in Port-au-Prince more than four years after the quake. There is no relocation plan for the residents of these camps, and in some areas of Port-au-Prince there is still rubble remaining. If this is the precedent for what happens to those who are displaced in Haiti, then the inhabitants of Île-à-Vache should be concerned about their futures.

Will many farmers and fishers from the island end up in the shantytowns of Haiti, as have hundreds of thousands of displaced farmers before them? Those who were living in hillside shantytowns had the highest mortality rate from the earthquake. Île-à-Vache’s population continues to be unsettled, uncertain of its future.

And so the Île-à-Vache community sings in protest:

Nou gen kasav (We have cassava)

Nou gen kafe (We have coffee).

Nou pa bezwen pwoje sa (We do not need this project).

**The actual presentation with powerpoint which includes multiple images can be found on the CREST-CTO conference website http://www.onecaribbean.org/resources/conference-papers/