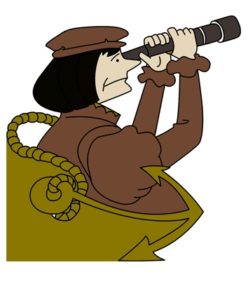 BY PIERRE-RICHARD LUXAMA AND BEN FOX
A shipwreck off the north coast of Haiti probably isn’t a lost flagship of Christopher Columbus as a U.S. explorer has claimed, the country’s culture minister says.

An analysis of the wreckage by a team of experts from UNESCO is expected within days but Culture Minister Monique Rocourt said the evidence she has seen and heard so far indicates that the wreckage is not the Santa Maria, which struck a reef and foundered in December 1492.

Rocourt, who met this week with members of a team from Spain seeking permission to search for the Santa Maria, said in an interview Thursday with The Associated Press that some experts believe the wreckage identified as the ship is in the wrong place and not old enough to be the Santa Maria.

“We are still awaiting the final report, but so far what we have seen … tends to lead us to think it is a later ship,” she said of the wreckage found by Barry Clifford in about 15 feet of water near the northern city of Cap-Haitien.

She said the wreckage identified by the U.S. explorer with great fanfare in May appeared to be from a 17th or 18th century ship.

Clifford, known for discovering a pirate ship off Cape Cod in 1984, stands by his belief that he found what’s left of the Santa Maria. He said in phone interview that he has heard the UNESCO report raises doubts about the claim but said the organization’s team of experts never consulted with him and did not even request his surveys and photos from the dive site. “I think it’s going to be highly, highly prejudiced,” he said.

Finding the Santa Maria would be a major archaeological feat if confirmed. Experts have urged caution about making any abrupt claims because of the difficulty in identifying the remains of a wooden ship after more than 500 years in a region littered with wrecks.

Columbus’ ship struck a reef or a sand bank in the middle of the night and was abandoned on Christmas Day of 1492. Archaeologists and historians say the vessel was evacuated and about two dozen crew members were left behind in a fort built with the wood from the ship and christened “Navidad.”

When Columbus returned a year later, the men had been killed or had vanished and the settlement was burned to the ground

The location of Navidad is at the heart of the search for the Santa Maria. Clifford said he searched in an area where the shipwreck should be in relation to the settlement, based on the diaries of Columbus. At precisely that spot, the explorer and his son in 2003 found a type of cannon known as a lombard used on 15th century Spanish ships along with ballast stones and other evidence.

When they returned this year, the cannon had apparently been looted but they have photos of it and he said the overall case is “overwhelming” that this is the Santa Maria. “It’s so obvious it just screams at you.”

The researchers from Spain, however, believe that the coastline in that area has expanded as a result of deposits of sand from nearby rivers and that the likely resting place of the Santa Maria is now on land, according to a report they provided to the Haitian government. Rocourt says the Spanish team is seeking permission to excavate along the shore, a proposal she welcomes.

“We are open to suggestions on where to find that famous ship. It is quite an enigma,” she said.

Barry Clifford is a flake who courts publicity.

He was in Haiti, a number of years ago, near Isle a ‘Vache. At that time the so-called Columbus wreck had been researched and  it was decided this was not the real thing.

1 thought on “Official: Wreck off Haiti likely not Columbus ship-Added COMMENTARY By Haitian-Truth”