Former Cardinals pitcher Kyle McClellan announced “Brew For Impact” Tuesday morning, partnering with Kaldi’s Coffee and a farm in Haiti that’s been around since 1898. 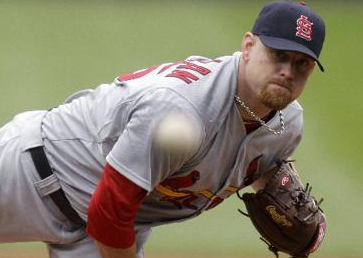 Today is a BIG day! Lets sell some Haitian coffee and help kids and a community. Can’t beat that! https://t.co/Rhy5WKze76

He’s not just working to rebuild homes and services in Haiti through his “Brace for Impact 46” foundation.

The former St. Louis Cardinalspitcher wants to help improve the country’s economy by connecting the locally owned Kaldi’s Coffee with a coffee bean farm in Haiti.

The beans are grown on a farm that’s been in operation since 1898, creating farming and shipping jobs in the process.

From there, the beans are sent to Kaldi’s Coffee in St. Louis for roasting, packaging, and distribution to customers.

And proceeds go back to Haiti, helping fund the children’s home, school, and medical clinic through Brace for Impact 46.

McClellan tells KMOX he went to Haiti with Kaldi’s Coffee in February and that’s where the idea came from.

You can order your own bag, coffee mug or a t-shirt here.