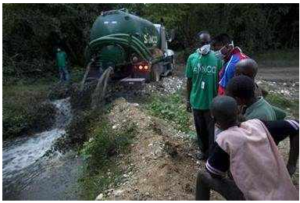 Mirebalais, Haiti: Milirary base being probed as source of Haiti cholera outbreak

MIREBALAIS, Haiti – U.N. investigators took samples of foul-smelling waste trickling behind a Nepalese peacekeeping base toward an infected river system on Wednesday, following persistent accusations that excrement from the newly arrived unit caused the cholera epidemic that has sickened more than 4,000 people in the earthquake-ravaged nation.

Associated Press journalists who were visiting the base unannounced happened upon the investigators. Mission spokesman Vincenzo Pugliese confirmed after the visit that the military team was testing for cholera — the first public acknowledgment that the 12,000-member force is directly investigating allegations its base played a role in the outbreak.

1 thought on “MINUSTAH PRESENCE IN HAITI IMPORTANT IN THE SUPPORT OF COCAINE TRAFFIC, TRAFFICKING OF CHILDREN, KIDNAPPING,PROSTITUTION, PREVAL’S CRIMINAL GOVERNMENT AND NOW THE INTRODUCTION OF CHOLERA INTO NATION.”