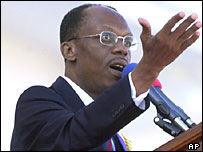 The feds in Miami are focusing on Haiti’s ex-president for his alleged role in a money-laundering plot involving phone contracts.

BY JACQUELINE CHARLES AND JAY WEAVER

Former Haiti President Jean-Bertrand Aristide is once again in the cross hairs of the U.S. government, this time for allegedly pocketing millions of dollars in bribes from Miami businesses that brokered long-distance phone deals with Haiti’s government-owned telecommunications company, according to court records and legal sources.

Aristide is not identified by name in a recent federal indictment charging four South Florida business people and two former Haitian government officials. But defense attorneys say “Official B” referenced in the corruption- and money-laundering indictment is indeed the ex-president.

According to the indictment, Official B and senior officials of Haiti Teleco, the telecommunications company owned by Haiti’s Central Bank, allegedly received payments totaling about $2.3 million from Miami businesses Cinergy Telecommunications and Uniplex Telecom Technologies. The businesses are accused of using “shell” companies to kick back the money to those officials.

Aristide’s lawyer, Ira Kurzban, declined to comment about the Justice Department’s investigation because the ex-president hasn’t been charged with any crime. But, Kurzban said: “I view this as part of the same smear campaign that the United States has orchestrated against Aristide since he was first elected in 1990.”

The indictment alleges that the bribes were passed to Aristide via “Company A,” a reference to Digitek, a suspected front owned by Aristide’s brother-in-law, Lesly Lavelanet. He could not be reached for comment at his Coral Springs home.

Since an earlier related indictment was returned by a federal grand jury in 2009, a dozen South Florida business people and Haitian officials have been charged in the high-profile case, alleging the payment of kickbacks in exchange for discounted long-distance phone rates. Profits from those lower rates were pocketed by the Haitian officials — not the government’s phone company. So far, seven of those defendants have been convicted of corruption or money laundering, including Patrick Joseph, who pleaded guilty in February to accepting bribes. Joseph is cooperating with Justice Department lawyers and is a crucial witness in the investigation of Aristide, according to sources familiar with the case.

Joseph, who served as Aristide’s director general of Haiti Teleco in March 2001 to June 2003, has told U.S. authorities that he shared some of those kickbacks with the former president, the sources said. Joseph’s father, Venel Joseph, appointed by Aristide, was the governor of the Bank of Haiti, the central bank, during that period and is referenced in the indictment as “Official A.’’

The Central Bank was used to distribute the kickbacks paid by the Miami businesses, the indictment says.

At Joseph’s plea hearing last month, a prosecutor said “half” — or $1 million — of the alleged kickbacks were “intended” for “Official B, an official in the executive branch of the Haitian government.”

“In exchange for these bribes, Official B and Joseph provided Uniplex and Cinergy with various business advantages, including an exclusive agreement to market certain calling cards at a favorable rate,” Justice Department lawyer James Koukios said in court.

“In addition, Joseph was aware of and agreed that additional bribe payments to Official B would be laundered through Company A,” Koukios said, without mentioning Digitek by name.

The revelation that federal officials are still pursuing Aristide, years after a U.S. grand jury investigation failed to nab him on drug-trafficking and money-laundering allegations, comes at a politically charged time in Haiti.

Still, thousands marched through the streets of Haiti’s capital Wednesday, singing pro-Aristide slogans while bashing Martelly, to mark the eighth anniversary of Aristide’s ouster from power on Feb. 29, 2004. The demonstration — the biggest anti-Martelly protest since he came to power in May — showed that Aristide still enjoys a measure of popularity. He returned to Haiti from South Africa last March over the strong objections of the Obama administration.

Before it was privatized last year at the behest of the U.S. government, Haiti Teleco was a corruption-plagued, money-losing company that fueled the bank accounts of its executives. Fewer than 2 percent of Haitians had service from its landline monopoly, but it had a lucrative long-distance business. After the January 2010 earthquake, the company finally got a lifeline when a firm named Viettel, run by Vietnam’s military, bought a major stake in the entity, reducing Haiti’s shares to 40 percent.

The controversy over Haiti Teleco’s corrupt past will play out again Monday, when a former senior executive, Jean René Duperval, faces trial on money-laundering charges in Miami federal court as part of the initial indictment. He is accused of receiving bribes from the same Miami businesses.

The trial of Duperval, Haiti Teleco’s former director of international relations, highlights the Justice Department’s persistence in pursuing the bribery case and Aristide.

Some question the zeal. But Alex Dupuy, a sociology professor at Wesleyan University who has written about the two-time ex-president, said “if they have solid evidence of his involvement in bribery or other criminal activities, they should indict him and bring him to justice.”

The U.S. government may be sending a signal to Aristide, called Titid by his admirers, to think twice about trying to re-enter the political scene, observers said.

“The display of popular support for Aristide is very worrisome to the U.S., so indicting Titid before a potential comeback makes perfect sense,” said Robert Fatton, a Haiti expert at the University of Virginia.

Still, unless the Justice Department has an air-tight case, arresting Aristide could have volatile consequences, observers said.

But the Haitian government’s financial watchdog agency could not prove the allegations. Also, a civil lawsuit filed in Miami by the interim government, gained no traction.

Meanwhile, federal prosecutors investigated Aristide for allegedly accepting bribes from drug traffickers. But they could not make their case because of a lack of financial documents to back up convicted cocaine kingpin Jacques Ketant’s accusations, according to sources familiar with that probe.

Now, the mere mention of Aristide as Official B in the Foreign Corrupt Practices Act indictment filed by the Justice Department in January marks the first time he has been implicated in the U.S. bribery investigation into Haiti’s state-owned telecommunications company.

From 2001 to 2004, “Official B was an official in the executive branch of the Haitian government,” says the indictment, describing the exact period of Aristide’s second term as president.“I am led to believe that Official B is the former president of Haiti, Aristide,” said veteran Miami criminal defense attorney Joel Hirschhorn, who represents Cinergy and two of its executives in the case.

“There is no doubt that Official B is Aristide based on the language in the indictment,” said Miami lawyer David Weinstein, who was the chief of narcotics in the U.S. Attorney’s Office during the past decade. He and other prosecutors won convictions against several Haitian government and police officials for accepting payoffs from drug traffickers, who used the country to ship cocaine to the United States.

But Weinstein cautioned that the Justice Department will face daunting challenges in making a money-laundering case against Aristide, even if the cooperating witness, Joseph, points investigators in the right direction.

There is a looming deadline in the probe because of the statute of limitations. Also crucial: Internal Revenue Service agents must find bank or financial records to show that Aristide received payments, if he did.

“Without someone producing a picture of him taking the money or agents uncovering a bank account directly linking him to payments, they are going to have a hard time building a case to win a conviction,” Weinstein said.

Last week, Hirschhorn succeeded in getting Cinergy dismissed as a defendant before Monday’s trial.

“My clients’ dealings with Haiti Teleco were perfectly legitimate,” said Hirschhorn, who added that Cinergy’s top executives, now fugitives in Brazil, only met Aristide once for a brief moment. “They helped Haiti Teleco get through some very difficult and trying times.”

1 thought on “Miami bribery probe zeroes in on Aristide”