This initiative, the largest private sector investment made public in Haiti since January’s earthquake, will support relief efforts and lay the foundation for the modernization of the country’s shipping industry, said Youri Mevs, managing partner of the WIN Group, a family-owned conglomerate.
WIN Group owns and operates Terminal Varreux, about two miles north of Port-au-Prince’s main public port. It was originally constructed during the Duvalier period when Fritz Mevs Senior stole the dredging unit from  the Peligre hydroelectric facility. Because of this, Peligre has silted up to the point where it is no longer capable of generating its design output. With shallower water it takes more to turn turbines, wasting  millions of gallons of a valuable resource as the bottom of Peligre Lake accumulates vast quantities of fertile soil as sediment..  By controlling a dock facility the Mevs family has managed to benefit from some unusual customs arrangements or a total disregard for the customs laws of Haiti.
The plan includes a new port and jetties, a 150-acre terminal open to all maritime lines, improvements in existing infrastructure plus additional facilities. Using private funding, the project is expected to create about 3,000 jobs in Haiti.
“People really needed to see a project like this to know that there is a better future for Haiti,” Mevs said in a telephone interview. “We import almost everything we use and a healthy port system has an impact on every segment of society. If Haiti wants to enter this century, we must have structures that work and that can deliver results.”

The first step in the three-to-five-year project involves building two deep-water jetties for container cargo at a cost of between $20 million and $25 million. Construction on this stage will begin in about 60 days and will generate about 800 jobs, Mevs said. The jetties should be operating by this summer, she added.
“The creation of new port facilities will greatly increase the capacity of Port-au-Prince to accommodate ongoing demand for relief and recovery cargo into Haiti,” Bruno E. Ramos, chairman and chief executive of Santé Holding, a marine transportation company based in Florida, said in a news release. 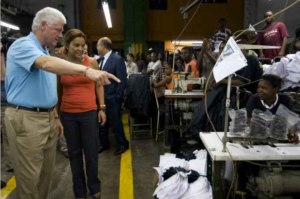 .The holding company owns and operates Santé Shipping Lines, which offers direct container service from the Miami River to ports in northern Haiti. Santé Holding is partnering with the Rovirosa family, operators of terminals at the Port of Miami and Port Everglades, for the project. They will develop, manage, and operate the new container facility at Varreux.
Terminal Varreux now has multiple berths connected to pipelines carrying liquid and dry bulk materials. It was damaged during January’s earthquake but was repaired in order to handle fuel imports. The terminal receives and stores about 70 percent of the petroleum used in Haiti.
Under the agreement announced Tuesday, WIN Group will retain control of the dry bulk, liquid bulk, and petroleum operations at Terminal Varreux, while the new facilities will be operated by the new joint venture.
WIN Group and the Soros Economic Development Fund last year announced a $45 million program to develop an industrial park near Port-au-Prince’s Cité Soleil neighborhood. The project has been halted temporarily due to the earthquake. 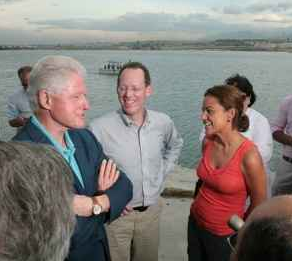 This is what Baussan did not want, he fought with Mevs. He wanted to continue controlling the Port in Port-au-Prince. Préval was protecting Baussan, unfortunately the earthquake changed the equation. Terminal de Varreux is going to be Number ONE.

1 thought on “Mevs Against Baussan :Haiti- Port – the fight has just begun”