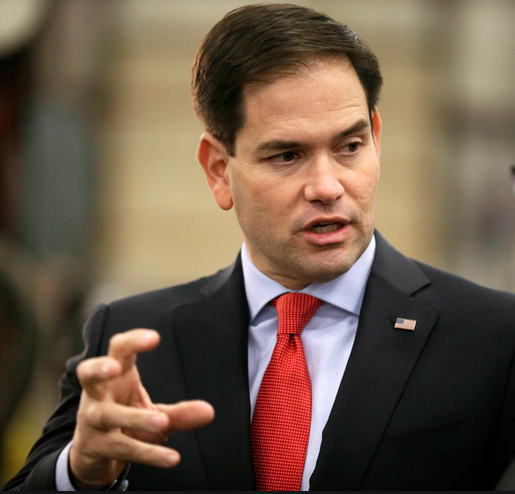 Caracas, March 28, 2017 (venezuelanalysis.com) – Florida Republican Senator Marco Rubio publically warned the governments of El Salvador, Haiti, and the Dominican Republic Monday that the US would cut off aid if they failed to vote to suspend Venezuela from the Organization of American States.

“This is not a threat, but it is the reality,” said Rubio, speaking ahead of an extraordinary OAS session scheduled for Tuesday, in which the body’s 35 member-states may be called to vote on whether to invoke the Inter-American Democratic Charter against Venezuela.

“We have a very difficult situation in Washington, where massive cuts in foreign aid are under consideration and it will be very difficult for us to justify assistance to those countries if they, at the end of the day, are countries that do not cooperate in the defense of democracy in the region,” the senator added.

El Salvador’s left-wing FMLN government, for its part, slammed Rubio’s instrumentalizing of US aid as a means of “political pressure”.

“Marco Rubio’s disregard for international treaties that mediate and lay down the rules for cooperation astonishes us,” expressed Eugenio Chicas, spokesman for President Salvador Sanchez Ceren.

Chicas added that Washington is welcome to cut off future aid, noting however that slashing current assistance would be a violation of previous agreements.

The Dominican Republic likewise responded to Rubio by reaffirming its commitment to non-intervention and support for dialogue in Venezuela.

“The Dominican Republic supports dialogue as the solution to the situation in Venezuela,” declared Dominican Foreign Minister Miguel Vargas Maldonado.

Santo Domingo has been a key player in Vatican-sponsored talks between the Maduro government and right-wing opposition over the past year, with former Dominican President Leonel Fernandez serving on the UNASUR mediation team alongside the former presidents of Spain and Panama, Jose Rodriguez Zapatero and Martin Torrijos.

“We appeal to the international principle of non-interference in the internal affairs of [other] countries, respecting their sovereignty,” Vargas Maldonado continued.

Haiti, for its part, has yet to issue public statement concerning Rubio’s remarks.

Under the Chavez and Maduro governments, Caracas has forged strong political and economic ties with the three neighboring countries, which are all members of Venezuela’s regional energy integration initiative known as PetroCaribe.

Rubio’s comments come as OAS Secretary General Luis Almagro scrambles to amass a two-thirds majority of member-states to support Venezuela’s suspension, which has faced opposition from not only leftist governments, but also close US allies.

Most recently, the right-wing Kuczynski government in Peru, one of Venezuela’s most vocal critics in the region, has cast doubt on the success of the bid, calling it “extreme” and admitting that “there is not a majority”.

Likewise, Costa Rica has announced that it would not endorse the application of the Democratic Charter, insisting that the only solution to the country’s current crisis is “electoral”.