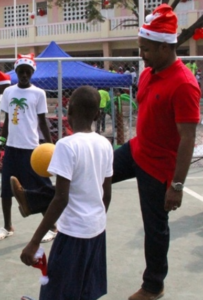 Jean-Jacques has worked tirelessly to improve his ministry, and those he serves.

He is a hands on guy who recognizes the needs of the people and works to make improvements in his areas of responsibility. He is an innovative thinker who is not simply marking time. Each day he thinks of Haiti, and its people.

One of his hallmark projects sees Street Kids taken off the streets and into good accommodations, with the possibility of doing something with their lives. Jean-Jacques has created four of these units, two for boys and two for girls. The kids ages range from 6 to 16. Two boys units, on Delmas 3 and Correfour, and girls in Hinche and Plateau Centrale.

The Christmas program, at Delmas 3, reflected his work as a leading Minister in the Martelly/Lamothe government. The boys from Delmas 3 and Correfour united for a really wonderful Christmas party.

For once, in their lives, there was no limit to what they could eat…. Hot dogs, popcorn, fresco, candy, sodas, chips. And each received a gift.

One would have to travel far to see 408 boys as well-behaved.

The emotions these kids displayed for the Minister was something to see.

Charles Jean-Jacques departure will be a loss for all, unless this is a plan that sees him move to become MINISTER OF EDUCATION.

Jean-Jacques would be an excellent Education Minister.

However, if this should be the case, he requires Martelly/Lamothe support to clean his ministry of such impediments created by staff that works against the ministry’s purpose. A new minister must be able to select his own team. Otherwise, he will be trying to function, with his hands tied.

The Minister must be able to name his Director General and Administrative Director. Vanneur Pierre, the present Minister of Education has enemies within his structure that prevent its efficient function.

There are several individuals who do their best to ensure failure and, by doing so, deny our children their right to a good education.

The Ministry of Education need a real leader, someone who has the childrens’ best interests at heart. Charles Jean-Jacques is the one!